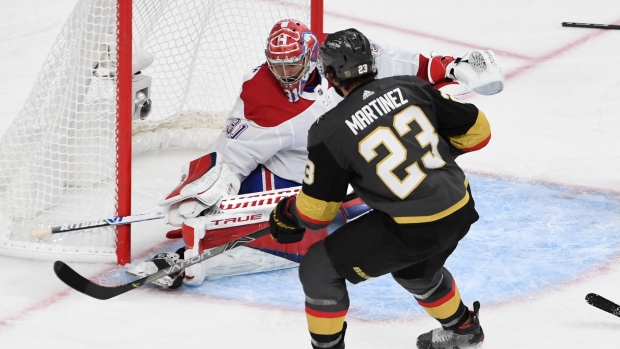 Paul Byron scored his first goal in 12 games to extend the Montreal Canadiens lead to three but Alex Pietrangelo responded quickly with a late goal to close the Canadiens' lead to 3-1 over the Vegas Golden Knights after two periods.

Byron added his second of the playoffs on a clean break by beating Marc-Andre Fleury with a backhand. Pietrangelo quickly responded, scoring with a quick wrist shot off an offensive zone faceoff win.

After falling behind 2-0 in the first, the Golden Knights outshot the Habs 9-4 in the second as they pushed to close the deficit.

Former Canadiens captain Max Pacioretty came close to scoring the Golden Knights’ first goal early in the period but rang it off the post on a quick wrist shot that beat Carey Price.

Price made his best stop of the game mid-way through the second period, coming across his crease to stop Alec Martinez on a cross-ice pass.

Price has made 13 saves through two periods, while Fleury has also stopped 13 shots.