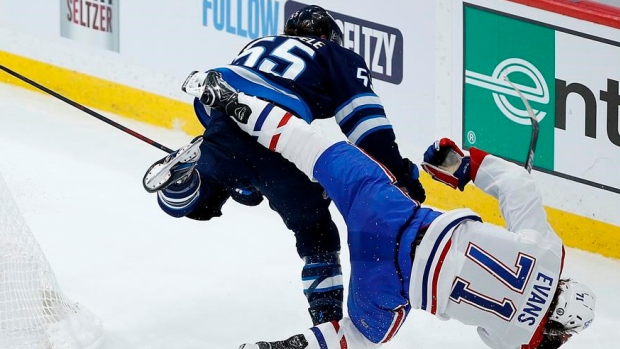 “For me, the feet are on the ice, the arms are tucked in and it's a body contact," he explained to reporters in the team's off-day Zoom call. "That's the way I see it.”

Scheifele faces a hearing after the Jets forward's crushing hit on Evans in Game 1 of their North Division final series. He was assessed a major for charging and a game misconduct. Evan had just come around the empty net and scored with 57 seconds left in the Canadiens' 5-3 road win.

Evans flew to the ice banging his head and was carried off on a stretcher. Montreal interim head coach Dominique Ducharme called the hit “vicious“ and “useless.”

“You need to do everything you can to stop a goal from being scored," said Maurice. "Hitting is part of the game.

"It was a heavy, heavy hit for sure, but it was clean. So it’s part of the game and I don’t even like that phrase but depending, as you said, what flag’s on the car, you have a different opinion on that. But their guy took a hit to make a play. Our guy made a hit. It won them the game. Move on.”

Because it is not an in-person hearing (done on a Zoom call because of COVID restrictions), the NHL's Department of Player Safety says in its regulations that the maximum suspension is five games.

Maurice was seen at Thursday's morning skate having a long discussion with Scheifele as the team prepared for Game 2 on Friday.

“I’ve talked to everybody this morning," Maurice explained. "He’s a big strong powerful man that can skate. In order to try and cut that play off, he was skating pretty good. He wasn’t striding through the hit by any means.

"It was a hell of a hit. It was hard. Good on Evans, he took the hit to make the play. I didn’t have to bring in Oprah or Dr. Phil to sit down with Mark to see how he’s feeling this morning.”