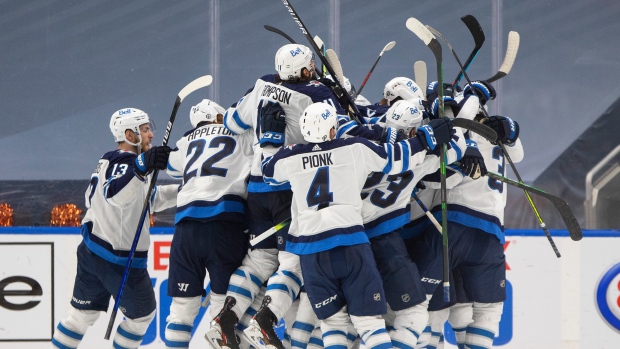 EDMONTON — A Paul Stastny overtime winner and another stellar outing by Connor Hellebuyck in Winnipeg's net gave the Jets a two-game lead in their playoff series with the Edmonton Oilers.

Stastny ended a scoreless stalemate 4:06 into the extra period Friday in Winnipeg's 1-0 victory.

The Jets took both games in Edmonton to lead the best-of-seven, first-round series 2-0 after winning Wednesday's opener 4-1.

Games 3 and 4 are Sunday and Monday respectively at Winnipeg's Bell MTS Centre, where the Oilers went 4-1 in the regular season.

Stastny took a stride from the boards and beat Oilers goalie Mike Smith with a screened wrist shot top corner.

"I figured I'd try to use the D as a screen, and just put the puck on net," Stastny said.

Hellebuyck posted a 38-save shutout for the win and stopped 70-of-71 shots over the first two games.

"He’s the reason we have a chance," Jets captain Blake Wheeler said.

"He’s the reason we are a playoff team and the reason we have confidence every time we go out there. You just can’t say enough about having a guy who you believe is going to stop every shot."

Edmonton counterpart Smith had 35 saves in a goaltenders' duel at Rogers Place, which was devoid of spectators save for a dozen front-line health care workers.

Oilers captain Connor McDavid and teammate Leon Draisaitl — the NHL's top two scorers in the regular season — were held off the scoresheet a second straight game.

"Our desperation has to get up," McDavid said. "We've got to be hungry around the net. Some loose pucks laying around there that are waiting to be put in the net.

"We've got to send them on their way. Maybe a little hesitation in certain spots."

"We dug ourselves a bit of a hole," McDavid said. "Both games could have gone either way. It's not the position we want to be in.

"We've been a good road team all year long and had success in that building as well and we've been good on back-to-backs."

The duo generated more high-grade scoring chances than in Game 1, but Winnipeg continued to play a heavy, constricting game.

"There’s cost to it too," Maurice said. "We’re not generating a tremendous amount of offence in the game but that’s the price that has to be paid to be on the right side for the most of the time and, if you’re not, to make sure the puck stays on the outside.

"We’ve had to give a little up here to give ourselves a chance. Those guys are so dangerous, so elite."

A Stastny slashing penalty and a Logan Stanley boarding minor gave Edmonton a five-on-three advantage for 21 seconds early in the third period.

The NHL's best power play didn't capitalize on it or the ensuing five-on-four.

A prone Jets defenceman Dylan DeMelo blocked a McDavid shot throwing his arms in the air during a goalmouth scramble.

"Honestly, it was just pure chaos and desperation," DeMelo said. "I just put my hands up and luckily it hit me."

Edmonton's power play went 0-for-4 and Winnipeg was 0-for-2 in the first two games of the series.

Hellebuyck stopped Darnell Nurse on his doorstep twice Friday and caged Slater Koekkoek's one-timer on a Draisaitl drop pass in the second period.