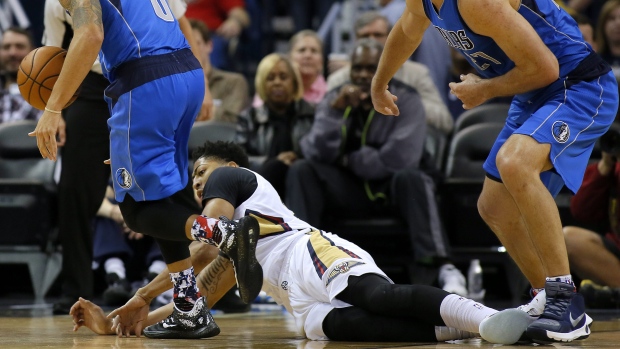 NEW ORLEANS - Anthony Davis and the New Orleans Pelicans were so good in the first half that they were never threatened even after he left with an injury.

Davis scored 17 points before leaving at halftime with a bruised right hip, and the Pelicans beat the Dallas Mavericks 120-105 on Tuesday night for their first victory of the season.

Davis helped the Pelicans (1-6) build an 18-point halftime lead that never dipped below 14 points even after he departed for what team officials said were precautionary reasons.

Coach Alvin Gentry said Davis had a posterior or medial thigh injury, but wasn't sure the extent or the specifics, saying only that the forward was kneed in the second quarter and was having more tests done before the Pelicans flew to Atlanta. Initial X-rays at the arena were negative.

All Gentry knows is that for the seventh game this season, New Orleans had to find a way to finish without a full roster.

"Even with Anthony playing, we've got some really key guys sitting out," Gentry said. "You can do one of two things: You can just move on and try to play and do the best you can, or you can sit around and mope and have a pity party. We don't have time for a pity party."

Ryan Anderson finished with 25 points and 11 rebounds, and Ish Smith recorded his first career double-double, ending the game with 17 points and 12 assists. Eric Gordon, meanwhile, jump-started it all with New Orleans' first five points on his way to 17 for the game.

"We've got a long year," Anderson said. "This is a small stretch of games. Obviously now that we have a win, we want to kind of move on past (it) and have a winning mentality now. We know what we need to do."

New Orleans broke out to a 12-0 start, setting the tone for the rest of the game.

"They were making shots and we weren't," Dallas coach Rick Carlisle said. "Their level of force was higher without question. A lot of this you have to credit them. They had a bunch of guys step up and play big."

Dirk Nowitzki scored 18 points for Dallas, which trailed 37-36 after Zaza Pachulia's basket before the Pelicans went on an 18-0 run that began with three straight baskets by Davis.

New Orleans shot 50 per cent for the game, including 14 of 33 from 3-point range, and outrebounded Dallas 48-44. It was just the second time this season the Pelicans have finished with more rebounds than their opponent.

Dallas, meanwhile, was just 5 for 20 beyond the arc.

Mavericks: All four of the Mavericks' losses have come by double digits. . G Deron Williams was just 4 of 10 shooting and finished with eight points and three assists.

Pelicans: New Orleans signed guard Jimmer Fredette before the game to help boost an injury-depleted roster. He entered the game late in the fourth quarter. . C Omer Asik played for the first time in four games after missing the previous three with a calf strain. Asik scored four points in 15 minutes.

Tuesday night marked the first game in a run of four contests in five nights for Dallas. It's the only time this season the Mavericks will have to do this and coach Rick Carlisle is all right with that.

"This is the most difficult stretch of the season," he said. "And, going forward, I hope we can chip away at the exhibition season and get rid of some of those. Then, eventually, we can get rid of the back-to-backs."

The Mavericks do have three other runs of four games in six nights the rest of the season.

New Orleans signed Smith the day before the season started. He has rewarded the Pelicans on the court by leading the team in assists. He entered the game sixth in the NBA, averaging 7.5 per game.

He had a career-high 12 against Dallas after setting his previous career high four days earlier with 11 against Atlanta.

Pelicans: At Atlanta on Wednesday