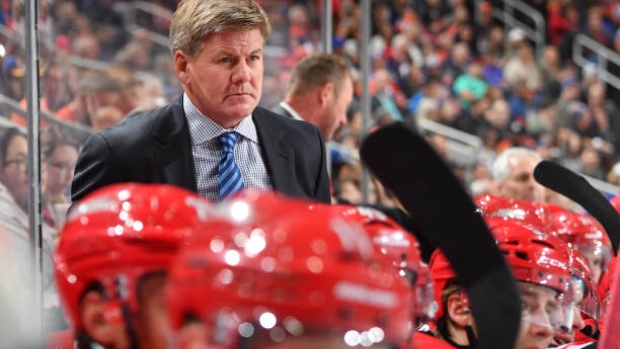 Bill Peters is walking away from the Carolina Hurricanes.

The 51-year-old head coach had until Friday to exercise an out clause in his contract with the team and did so Friday. He turned down a $1.6 million salary to coach the fifth and final year of his contract in Carolina.

TSN Hockey Insider Bob McKenzie reports that Peters, an Alberta native, is the leading candidate for the Calgary Flames head coaching job. He notes, however, that Peters has received interest from multiple clubs. TSN Hockey Insider Darren Dreger adds that all indications are Peters will be the next head coach of the Flames, but it is not a done deal as of yet.

Source says the Flames called Carolina yesterday to ask permission to speak with Bill Peters. Hurricanes had no issue with it. And Peters today opted out of his Hurricanes deal anyway...

McKenzie said Thursday that Peters' preference would be to coach in his home province and added Rod Brind'Amour already appears to be a name on Carolina Hurricanes owner Tom Dundon's radar for the team's next head coach. McKenzie added Friday that Dundon will also look outside the organization, though, for his team's next head coach.

Peters cited the team's vacany at general manager as a reason for exercising his opt-out clause. The team has been without a general manager since Dundon moved Ron Francis from the role to president of hockey operations in March.

“I want to thank Tom Dundon, Peter Karmanos and Ron Francis for the trust they put in me to lead the team,” Peters said in a team release. “I feel the incoming general manager should have the ability to hire his own head coach. I also want to thank Don Waddell and the entire front office and PNC Arena staff. This business requires hard work and long hours, and I greatly appreciate the efforts of the many people I have worked alongside during the past four years.

“We enjoyed our time in Raleigh, and my family will always feel a connection to North Carolina. I feel like this is a good time to move on, and I am looking forward to my next challenge.”

McKenzie shed light on a toxic situation in Carolina on Thursday, reporting that both Dundon and Peters strongly preferred that Peters not return behind the team's bench next season, but were engaged in a game of chicken over the $1.6 million.

The Hurricanes owner had not committed to Peters staying on if he elected not to exercise his out clause. Dundon told the News and Observer that he's been flexible in allowing Peters to talk to teams about their head coaching vacancies.

“I have a lot of respect for Bill as a person and coach,” Dundon said in a release on Friday. “We thank him for his time with the Hurricanes and wish him success in whatever comes next.”

Peters will serve as Team Canada’s head coach for the IIHF World Championship next month in Denmark with Mike Yeo of the St. Louis Blues as associate coach and Bob Boughner of the Florida Panthers taking the reigns as an assistant. Peters coached Canada to a gold medal at the tournament in 2016, when Flames general manager Brad Treliving served as co-general manager of the team.