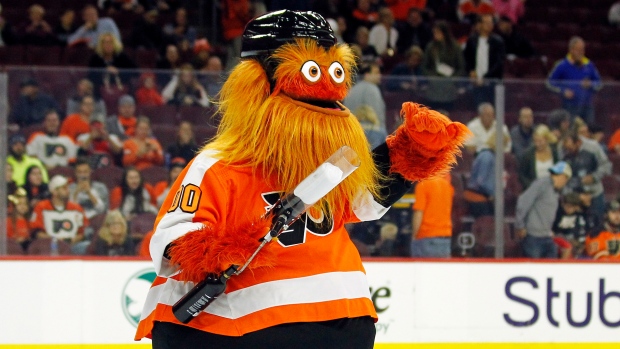 Flyers fan Chris Greenwell told The Philadelphia Inquirer that the mascot sucker-punched his 13-year-old son Brandon in the back on Nov. 19, while the Flyers said Gritty was hit in the head repeatedly.

The Inquirer obtained the emails between Chris Greenwell and the Flyers after Greenwell contacted the team to complain about a "lousy picture" with Gritty where the mascot was facing sideways as Brandon Greenwell looked at the camera. After the shoot, Chris Greenwell alleged that Gritty "took a running start," and "punched my son as hard as he could."

Greenwell added that "it was not correct for my son to harmlessly tap him on his head."

The Flyers said in a statement that they investigated the incident. "We took Mr. Greenwell's allegations seriously and conducted a thorough investigation that found nothing to support this claim," it read.