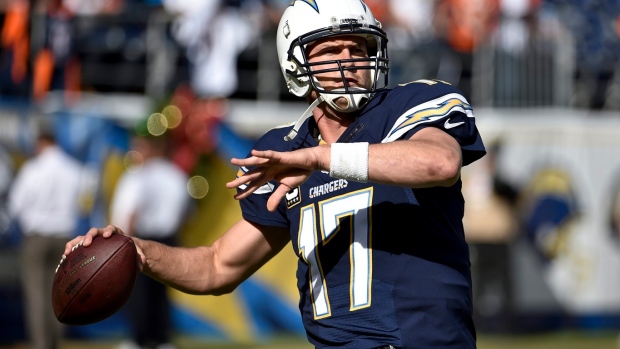 Philip Rivers hopes to be healthy, lead Chargers past 49ers in a must-win game for San Diego Article Image 0 , The Canadian Press

SANTA CLARA, Calif. - Philip Rivers and the San Diego Chargers are competing for their playoff lives with two games to go, slim as those chances might be.

Surprisingly, the San Francisco 49ers find themselves playing only to finish on a strong note — not for another deep post-season run they had become so used to in the first three years under embattled coach Jim Harbaugh.

It will be a little strange, indeed, for San Francisco with nothing at stake Saturday night on its home field.

Not that Rivers expects Harbaugh's team to back down one bit at this stage despite the uncomfortable circumstances and constant, swirling questions about Harbaugh's future with one season remaining on his $25 million, five-year contract.

"This is a team we respect a lot. They've been to three championship games and there's lots of reasons why maybe this year didn't turn out," Rivers said. "It's a late game in December with one week to go. Two teams are in different circumstances, but both have a lot of prideful guys and guys who are going to give everything. It will be a playoff-type intensity type of game."

The Chargers (8-6) are in a closing stretch that included a win at Baltimore and home losses to New England and Denver. They've gone from controlling their own destiny in the wild-card race to needing to win at San Francisco and at Kansas City, plus to get some help.

San Francisco (7-7) has its first three-game losing streak during Harbaugh's tenure, with two of those coming at the hands of the defending Super Bowl champion Seattle Seahawks in an 18-day span.

Now, the Niners are playing for a winning season.

"There's a lot at stake. That's the way we approach it," Harbaugh said.

Here are some other things to watch for Saturday at Levi's Stadium:

He would be down one of his favourite options, Keenan Allen, who was placed on injured reserve Tuesday with a broken right collarbone. In addition, inside linebacker Donald Butler went on IR on Monday with a dislocated left elbow.

Defensive tackle Corey Liuget said the Chargers need to learn from the losses and move on fast.

"We always know we can play with the best of them, but in order to be the best, to be considered one of the top three to five teams in the NFL, you've got to beat the best and we didn't prove that the last two weeks," he said.

KAEPERNICK PUSHES ON: Despite the disappointment this year, Colin Kaepernick would like to give San Francisco any possible momentum to take into the off-season.

Everybody thought these 49ers would be playing well into January. His subpar season has been key in the results.

"I think that's what everyone's expectation was, including ours," Kaepernick said. "You don't play this game for any other reason than to try to win a Super Bowl. And it's disappointing that we're not going to be able to accomplish that this year, but we have to keep moving forward."

WILL GORE GO?: Midweek, 49ers running back Frank Gore declared himself symptom-free from a concussion suffered last Sunday at Seattle and Harbaugh expects him to play. In what could be his final two weeks with the 49ers, Gore needs 196 yards rushing for his fourth consecutive 1,000-yard season and eighth in his 10 NFL seasons.

CHARGERS OFFENSE: The Chargers scored only one offensive touchdown in each of their past two games.

San Diego could be without running back Ryan Mathews for a second straight game due to an ankle injury. Without their running game, Rivers is more vulnerable.

"You definitely want to come out and play your best ball," wide receiver Eddie Royal said. "You want to make a statement and win those games, especially at home. That didn't happen, but it didn't take away from the type of team and type of players we know we have."

San Diego's defence has played well lately, but the offence has dragged down the team.

"If you play red-area defence the way our defence was playing the last couple of games we should win these games," coach Mike McCoy said. "But it's a team game."

NO MORE MCDONALD: The 49ers released defensive lineman Ray McDonald on Wednesday amid a sexual assault investigation by San Jose police only a month after the Santa Clara County district attorney's office decided not to file charges against him in a domestic violence case.

His dismissal leaves a void on what has been one of the NFL's best front seven units in recent years.

"What I can tell you is I was extremely disappointed, as all of us were, to hear about the latest allegations," general manager Trent Baalke said.