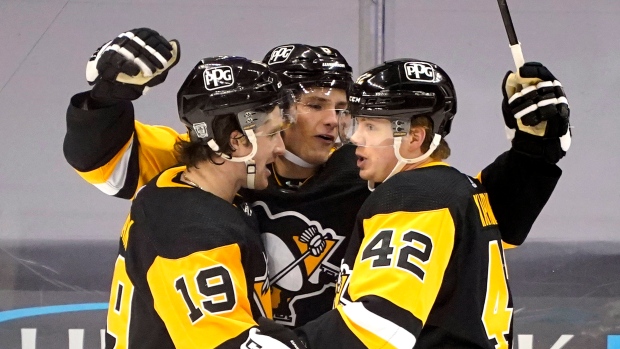 PITTSBURGH — Mike Sullivan is impressed with his team's resiliency. The Pittsburgh Penguins coach would just prefer it if his players didn't rely on it so much.

Kris Letang scored in the final round of a shootout, and Pittsburgh beat the New York Rangers 4-3 on Friday night for its third straight comeback victory.

Letang ripped a backhand over Igor Shesterkin to put the Penguins in front. Tristan Jarry collected his first win of the season when he stuffed New York's Tony DeAngelo moments later. Jarry's teammates poured over the boards to celebrate, while Sullivan exhaled after Pittsburgh scrambled back from a two-goal deficit.

“Once again it seems to be a bit of a recurring theme where it takes that type of adversity in the game for us to respond,” Sullivan said. "We’ve got to find ways to have better starts.”

New York's Filip Chytil, Adam Fox and Kaapo Kakko scored in a 3:01 span of the second period to give the Rangers a 3-1 lead. Shesterkin made 26 stops but let in two of the three shots he faced in the shootout.

“Just a part of our learning curve,” Rangers coach David Quinn said. "We have to understand we’re up 3-1, there’s a certain way to play. Certainly didn’t do that tonight.”

Bryan Rust and Jared McCann collected their first goals of the season for Pittsburgh, which has won three straight following an 0-2 start. Teddy Blueger tied it with less than 10 minutes to go and Jarry finished with 31 saves, an impressive response after being given two games off following a pair of rocky performance in Philadelphia last week.

“It’s huge,” McCann said. "Tristan works hard every single day. He’s a guy that you can really stand in front of and know he’s going to make the big save for us. Moving forward we’ve got to play better in front of him for sure.”

New York forward Alex Lafreniere, the top pick in the 2020 draft, is still looking for his first NHL point despite moving to the top line with Mika Zibanejad and Chris Kreider. Lafreniere didn't record a shot and was on the ice for a pair of Penguin goals.

“Alexis continues to do good things,” Quinn said. “He’s going to continue to get better. It’s Game 4 into his NHL career. I just love his passion and enthusiasm."

Pittsburgh defenceman Pierre-Olivier Joseph played 13:02 in his NHL debut and picked up the primary assist on Blueger's goal when his blast from the point hit off the end boards and ended up on Blueger's stick just outside the crease.

Joseph, part of the trade that sent Phil Kessel to Arizona in June 2019, was forced into action following injuries to Marcus Pettersson and Juuso Riikola. The 21-year-old sprinted around the ice before the opening faceoff to get the jitters out and then played with a poise the Penguins will need with Pettersson and Riikola both expected to be out for several weeks.

“Once the game starts, it’s hockey,” Joseph said. "I’ve been playing the sport forever. I told myself to enjoy it. It’s the first one. It comes only once.”

It's probably a good thing Sullivan is required to wear a mask on the bench as part of the NHL's COVID-19 protocols. He called a timeout following the three-goal flurry that gave the Rangers the lead and gave an impassioned speech that doubled as a wake-up call, the visible parts of his face turning red while testing the elasticity of his black mask.

“I was certainly trying to elicit a certain response and I wanted us to have a little pushback," Sullivan said. "It starts with our compete level and it starts with a mindset and a will to win and so that was part of the discussion. That’s just part of the emotion of the game.”

The teams complete their two-game set in Pittsburgh on Sunday night. They meet again at Madison Square Garden on Jan. 30 and Feb. 1.