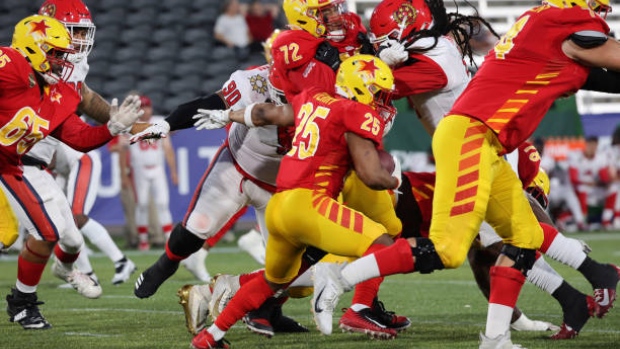 Collective bargaining in professional sports includes all kinds of different elements between players and leagues. But ultimately, as is often said, it all comes down to money.

That has mostly been a losing proposition for Canadian Football League players in recent years, with salaries stagnating in line with revenues.

The CFL is coming out of two tough seasons economically, the lost 2020 season and a 2021 season in which most teams had to deal with reduced crowds and revenues.

So, it’s not hard to imagine that owners aren’t in the mood to push the salary cap up much beyond its current level of $5.3 million per team, even though the players have come through a couple of tough economic years of their own.

But there’s another dynamic in play when it comes to compensation this time around. The CFL has competition for American players, both from the upstart United States Football League, which just completed its third week of a 10-game regular season, and the Dwayne Johnson-led XFL, which is preparing to begin play next February.

There’s an instinct to dismiss these leagues as paper tigers, given the number of alternative professional leagues that have come and gone over the past 35 years – a list that includes the original USFL, the original XFL, the United Football League, the Alliance of American Football and XFL2, not to mention various incarnations of arena football.

The CFL’s approach to each has been simply to ignore it, focusing instead on its own business while the competition dies on the vine. And that’s exactly what’s happened in every single instance, each time restoring the CFL’s pipeline to the best players in the world not under contract in the National Football League.

The fact that none of these leagues have lasted long enough to have a measurable impact on the CFL means we really don’t know what the effect a sustainable alternative league in the U.S. would have on the Canadian product. But by any measure, it wouldn’t be good.

That’s why there’s considerable concern in the CFL that player recruitment is going to be an issue over at least the next 12-24 months, and possibly beyond.

The reasons are obvious.

First, a salary comparison between what rookies are offered in the CFL versus the USFL and XFL.

The USFL pays its players $4,500 (U.S.) per week plus bonuses for victories, with players also receiving subsidized housing for the season.

While the XFL’s wage scale hasn’t been revealed, ESPN reported that last week that XFL officials have told agents the league will offer higher salaries and better benefits than the USFL.

The XFL apparently plans to have 70-man rosters with active rosters of 45 players for game day, providing opportunities for 560 players – roughly 200 more than the USFL currently does.

In addition, the XFL will have an NFL affiliation through a training facility in Canton, Ohio, that will prepare players for both leagues. On Thursday the XFL announced a series of “showcases” for June and July, aggressively jumping into the player recruitment game.

Those things alone are going to steer a lot of players away from Canada.

The timing and brevity of the spring-league schedules are also inviting to players, allowing them to play a 10-week regular season, with the possibility of stepping into an NFL camp during the summer, instead of the CFL’s 18-game, 21-week regular season.

Stretched over the length of an entire season, CFL players earning the league minimum earn just $3,095 per week in Canadian dollars, plus subsidized housing, and playoff incentives, which last season were worth $23,000 to each member of the Grey Cup champion Winnipeg Blue Bombers.

Alternative leagues such as the USFL and XFL are built on the one-size-fits-all model of salaries, where players do not have the ability to negotiate their own wages.

So that’s one area the CFL has an advantage, and why it won’t be losing any of its star players to these new leagues. But the issue is incoming talent. Selling those players on what they could make by year three or four in Canada won’t be easy.

The CFL raised its minimum salary from $54,000 to $65,000 in 2019, despite only a minimal increase in the salary cap. There isn’t much room to push that higher without raising the cap substantially.

The reality is the CFL can’t make its entry-level wage scale competitive at this time with the USFL or XFL without dramatically upsetting its cost structure.

All this comes at a time that the league has been self-examining the quality and entertainment value of its game.

Losing out on good players, namely those who represent the next wave of CFL stars, isn’t going to help that problem.

The CFL has long been in search of additional revenues, promising to share those with its players along the way. That’s no doubt the players are going to hear that again in this round of collective bargaining.

But there’s some urgency to paying the players better wages out of more than just fairness. It’s also about the product.