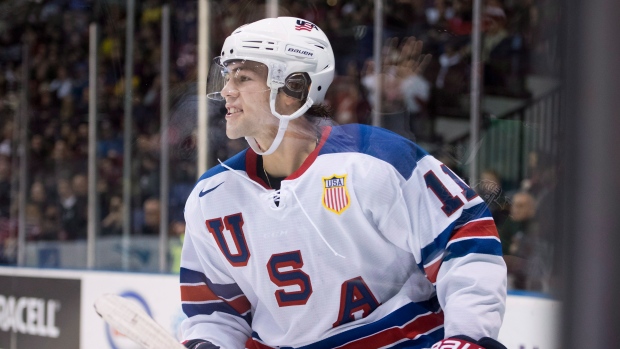 The Montreal Canadiens first-round pick (25th overall in 2017) has shifted from wing to centre for the U.S. while Hughes missed three preliminary-round games with an undisclosed injury.

All Poehling has done in his new role is take the tournament lead in scoring with eight points (five goals, three assists) while helping his team to a second-place finish in Pool B.

The highlight came during a furious third-period rally against Sweden on Dec. 29, where Poehling’s assist and natural hat trick (including two goals in the final minute) helped the U.S. erase a 4-0 lead and force overtime.

Sweden prevailed in the extra frame on Adam Boqvist’s goal, but the performance clinched MVP honours for Poehling in the round-robin portion of the tournament and a place on the tsn.ca Group B All-Star team.

Here are the rest of our selections:

Defenceman: Alexander Romanov, Russia - Tournament scoring leader among defencemen and his bold play on the blue line, without taking a penalty, has been felt in all areas of the game.

Defenceman: Alexander Alexeyev, Russia - His smart, calm and poised puck play in all three zones has been a steadying element for the entire team.

Forward: Philipp Kurashev, Switzerland - His five goals ties for the tournament lead and for the Swiss, his offence has made them a dangerous team.

Forward: Pavel Shen, Russia - Scored the biggest goal of group play with the winner vs. Canada which is his second contribution to a game-winner after his shorthanded assist to Kovalenko vs. the Czechs.

Forward: Cody Glass, Canada - Has been dominant in the faceoff circle and a catalyst for getting Canada on the scoreboard early.

Goalie: Ukko-Pekka Luukkonen, Finland - Big, strong, steady and has been the backbone of the Finnish team with his play.

Defenceman: Erik Brannstrom, Sweden - The King of the Swedish blue line with his four goals and strong play in every area and situation of the game.

Defenceman: Martin Fehervary, Slovakia - Excellent skater who takes the initiative and drives the play for Slovakia from the defensive zone, in transition and in the offensive zone.

Forward: Ryan Poehling, U.S. - The tournament’s leading scorer with a natural hat trick vs. Sweden, a back-breaking goal vs. Finland to secure second place and a key force with the absence of Jack Hughes.

Forward: Emil Bemstrom, Sweden - He plays the game with the same energy and enthusiasm as Montreal’s Brendan Gallagher and is an offensive threat in similar fashion. His 20 shots on goal is tied for the tournament lead.

Forward: Tyler Madden, U.S. - An excellent skater who uses his speed to great effect with an offensive bent to his game and is a key contributor to the perfect penalty in the tournament.