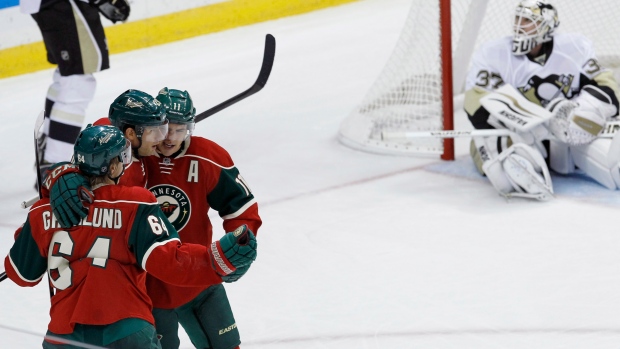 ST. PAUL, Minn. - Jason Pominville had a natural hat trick in the third period, and the Minnesota Wild beat the Pittsburgh Penguins 4-1 in an exhibition game on Monday night.

Pominville's one-timer from above the right circle beat Jeff Zatkoff at 8:39. Four minutes later, he scored on a wraparound, and he also had an empty-netter.

Steve Downie scored for Pittsburgh, which again played without captain Sidney Crosby. The centre missed the game to attend his grandmother's funeral.

Thomas Greiss made eight saves and Zatkoff had six for the Penguins (2-3-0). Darcy Kuemper stopped 32 shots for Minnesota.

Parise tipped in a pass from Mikael Granlund in the first period for a 1-0 Wild lead, and Downie controlled a pass from Kris Letang before sliding the puck into an open net in the second.