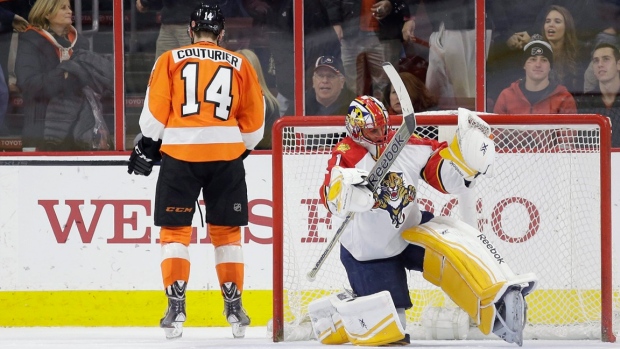 In the past week or so, there has been a 20-round shootout on one night, and eight-round and nine-round shootouts on another night.

The Florida Panthers alone have had four shootouts (including their 20-round outing against the Capitals) in the last six games, with three of them reaching extra innings - Luongo has made 29 saves on 35 attempts in those games.

The amount of shootouts of late has once again sparked debate over the game-deciding practice - whether you like it or not.

The one thing that has been consistent in the debate is that fans want an end to the game, period.

It’s amazing to think that it wasn't long ago that ties were still a part of the equation. Regardless of what you think of the shootout, it still has to be better than the old 1-1 tie that left not only fans, but players feeling empty for not having a conclusion to the game, good or bad.

Now I'm on record, of not loving the shootout. I believe the game is so high paced, and so high skilled, that there has to be a way to extend the four-on-four play, or to play a three-on-three format. I believe with either option, you will see more games end in OT and, as a last resort, have the shootout until you get to the conclusion.

I know and realize there are bigger entities to deal with in this debate. The most obvious concern, as far as NHLPA would be concerned, is extra strain being put on players to play more minutes in a night, in addition to building schedules, travel after games and many more details that have to be considered. It’s obviously tougher than just saying ‘lets add five more minutes to overtime,’ but I still would like to see a longer frame.

I have to preface my comments with saying, that I am 0-2 in shootouts in my career, and both reached extra shooters. So people may think my argument comes from a negative bias, but if you know me, you know it’s not coming from a place of disgruntlement. Instead, my quarrel with the display is more from a hockey fans perspective, that the pace of the game as well as the skill level is at an all-time high right now, and that some of the overtimes I have witnessed this year have been outstanding and left fans literally dying for the clock to continue - even if were for a few more precious minutes of three-on-three. An extra frame with fewer players would allow even more ice for the best players in the world to showcase their talents. And maybe that is to come, but we will have to wait and see.

The following are a couple things I have noticed about shootouts in my experience both as a player and as a goalie coach in the NHL.

Due to the shootout being a relatively sudden addition (brought into the NHL in 2005/06 season) the adjustment was huge for the goalies. It all began with the fact that none of them had grown up playing with it. All goalies worked on breakaways in practice and faced a few rare penalty shots in their careers, but suddenly precious points were on the line and a main focus had to be shifted to stopping these previously uncommon shots.

Facing a shooter in the shootout is extremely different for a goaltender than facing a breakaway. The pace in a game where someone is in alone, though still fast, is changed by shooter’s knowledge of an impending back checker. That defender, in essence, will force the shooter to be very quick with his decision-making and his play, so you may deal with one straight on move, or a couple if you’re dealing with an elite scorer, but everything was done at a real fast rate and, usually, straight on.

Now, enter the shootout, a completely different animal. There is no back checker and players are free to go outside the Zambonied lanes, allowing them change their angle or point of attack.  Shooters could also speed up and slow down at any rate to try and throw goaltenders off their typical depth in net. Finally, the highly skilled players would really get to shine with some ridiculous moves.

I can vividly remember in my playing days when we used to do breakaways or shootouts in practice for fun. On those days, when a guy made an unreal move to torch me or my goalie partner and leave you looking real silly, I’d yell at him, “do it in a game.” The point being, both of us knew full well he couldn't pull those moves off with the presence of the pressure from a back checker.

Enter the addition of the shootout, and suddenly, players were free to pull off those moves with a full point on the line. This meant veteran goaltenders who had treated shootouts in practice as a novelty for their entire career, were thrown into a situation where the shots were for real.
Being that it really wasn't part of their toolbox or repertoire as an NHL goalie, it became a huge challenge for guys. Some goaltenders really struggled with it early on, because they treated it like a breakaway, while players were smart enough to catch onto their pace and slowed things down to make a play. Some shooters tried to further level the playing field by adding spin-o-ramas, and all sorts of other real neat plays.

I soon noticed that some of the younger goaltenders in the league were having more success against shooters because they were familiar and practiced with it at lower ranks. This meant they felt comfortable with it by the time they made the jump to the NHL.

The second thing I noticed and experienced is how big the mental challenge was. There is always pressure in goaltending, but the shootout added a different type. There was lots of time to think and try and process information instead of reacting. In any sport, I’m sure you have heard a coach say, the player needs to just "relax and play," and not "over think the game." Coaches preach "let his instincts take over,” and though all those statements are clichés, all are true.

Therefore, when it came for the shootout, and goaltenders had the opportunity to get an extra point for their team - regardless of how your game went - you have a chance to be the hero with a win, or the goat with a loss.

In today’s game, with pre-scouting, video, and guys tendencies out in the open, goaltenders have the added pressure of processing information as they hear a player’s name being called. Goaltenders start to think of their opposition’s moves, what they're capable of, and they start to play in their head, ‘if I can just stop this one, they will get one for me at the other end.’

Yet with thinking of all the different scenarios that can happen, you can overthink and overanalyze, and before long you have beat yourself before the shot is taken.

Now the guys who are really good at shootouts and have mastered how to go through the process of it, allow themselves to react at what’s being thrown at them, and this is what makes them special, for sure. But make no mistake, this was something that was a work in progress for every goalie since the shootout was implemented less than a decade ago, and it still continues to be as shooters add more creativity to their efforts.

Regardless of what your opinion on the shootout is, whether you love it, or loathe it, you should know that the goalies have taken a while to adjust to it and the challenges that have come with it. Look no further than at Roberto Luongo, who is having a ton of success and has really began to enjoy the process at 35 years old. He worked hard at getting better at it on the fly, which is very tough to do, and it seems to be paying off for him and the Panthers for the time being.