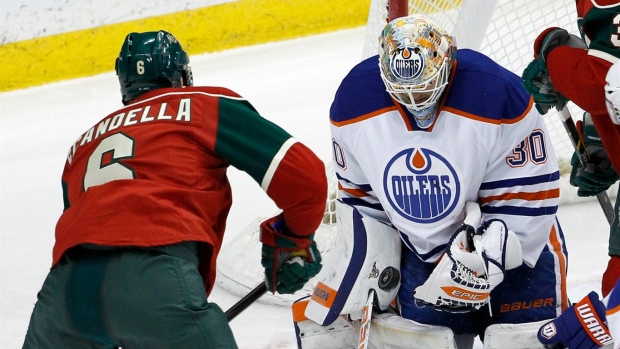 ST. PAUL, Minn. - Benoit Pouliot made sure his former team didn't embarrass his current one for the second time in less than a week.

"They outplayed us big-time (in Edmonton) a couple days ago," Pouliot said of his team's 4-0 loss to Minnesota on Friday. "Now we come in here and win the game, so for us it's always fun. We've just got to keep it rolling."

Edmonton won for only the fourth time in its last 24 games at Minnesota and handed the Wild their second loss in regulation since the All-Star break.

Pouliot, drafted fourth overall by Minnesota in 2005, beat goalie Devan Dubnyk twice in the first period and has scored in five straight games.

"He's a big body, he's not afraid to go to the net and tonight that line was going really well for us, especially in the first period," Oilers coach Todd Nelson said.

Over the last couple of days, Wild coach Mike Yeo's message to his team was to not let up and continue its post All-Star break surge. During the first period, that message didn't get through.

"That's what we were trying to guard against, not being ready to go," Yeo said. "We lost the game in large part because of our start."

Thomas Vanek scored his 13th goal to make it 1-all at 15:14 of the first, but Pouliot gave Edmonton the lead again 32 seconds later.

Minnesota took control of the game after the first period, but Scrivens stopped 27 shots in the final two periods to deny the NHL's hottest team another victory.

"They came right at him in the second and the third and were all over us," Pouliot said. "Benny stood right in there and made the big saves we needed."

Scrivens' efforts included denying Vanek on a breakaway opportunity midway through the second and standing tall during two Wild power plays in the third.

"Despite being hemmed in there, we managed it as best we could," Scrivens said. "They got some looks but I was able to see a lot of the shots and that's a credit to the D-men and the way they played in front."

Dubnyk lost for just the fifth time in 18 games since joining the Wild in a trade from Arizona on Jan. 14. The former Oilers goalie entered 5-0 with a 0.79 goals-against average against his former team this season.

Minnesota has a one-point lead for the final playoff spot in the Western Conference and plays four of its next five on the road, starting Thursday in Nashville.

"We're going to lose again before the season ends. Unfortunately, tonight was a game that one not good period cost us the game," Zach Parise said. "That's the reality, and their goalie was good. We'll be fine."

Jordan Eberle assisted on both of Pouliot's goals.

It was Pouliot's third multigoal game. He has nine goals in his last eight games.

NOTES: Before the game, Minnesota acquired forward Sean Bergenheim from Florida for a 2016 third-round draft choice. Bergenheim has eight goals and 10 assists in 39 games. ... The Wild placed D Jared Spurgeon, out since last Wednesday with an upper-body injury, on injured reserve. ... Oilers RW Nail Yakupov missed the game with a groin injury, but D Jeff Petry returned after missing two games with sore ribs. ... It was the 10th game in 18 days for the Oilers. Their next three will played in a span of 10 days. ... Vanek has seven points in the last seven games.