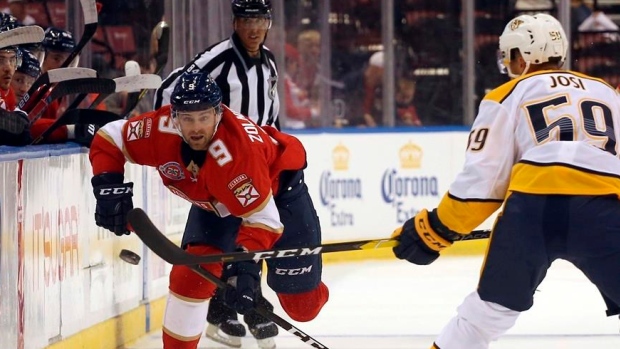 Neal Pionk scored 1:20 into overtime to lift the New York Rangers to a 4-3 victory over a New Jersey Devils split-squad, giving David Quinn a win in his preseason coaching debut Monday night.

Pionk's goal was the only time the Rangers led in the game. Lias Andersson had two goals and Pavel Buchnevich also scored for visiting New York.

The Rangers hired Quinn from Boston University to be the 35th head coach in franchise history on May 23.

Alexandar Georgiev made 16 saves on 18 shots for being replaced by Marek Mazanec, who made eight saves.

Nick Lappin scored twice for the Devils, and John Quenneville chipped had a goal. Keith Kinkaid made 14 saves in the first two periods, and Cameron Johnson stopped 10 of 12 shots in the third period and overtime.

In Columbus, Ohio, Linus Ullmark and Jonas Johansson combined to make 36 saves to lead the Buffalo Sabres past the Columbus Blue Jackets.

Ullmark made 20 saves on 21 shots in the first 40 minutes, and Johansson stopped 16 shots in his period of work.

Patrik Berglund, Nathan Beaulieu and Kyle Criscuolo scored in the second period for Buffalo, and Andrew Oglevie added a goal in the third.

In Sunrise, Florida, Juuse Saros and Tom McCollum combined for a shutout for Nashville in the teams' first split-squad game.

Saros, who started the game, made 20 saves in the first two periods. McCollum stopped all three shots he faced in the third.

Michael Hutchinson played the entire game in goal for Florida, and allowed all five Nashville goals on 31 shots.

Filip Forsberg had a hat trick and added an assist to lead the Predators to a 5-3 win in the second game.

Ryan Johansen and Kevin Fiala also scored for the Predators.

In Philadelphia, Shayne Gostisbehere scored twice to spark the Flyers past the New York Islanders.

Flyers starter Michal Neuvirth made eight saves in his half of the game before being replaced by Carter Hart, who stopped all 11 shots he faced.

In Winnipeg, Manitoba, defenceman Joe Morrow scored with 8:15 remaining in the third period to lift the Jets.

Morrow's shot appeared to go under Wild goalie Andrew Hammond and bounce out off the post, but it was signalled a goal.

The game was a battle of the backup goalies as the Jets sat starter Connor Hellebuyck and Minnesota did likewise with Devan Dubnyk.

Laurent Brossoit made 38 saves for Winnipeg.

Hammond finished with 28 stops for Minnesota.

In Montreal, Charles Hudon scored the tiebreaking goal during the Canadiens' binge of three goals in a 1:32 span early in the third period.

Trailing 1-0, Montreal tied it on Victor Mete's score at 3:08. After Hudson scored unassisted 1:03 later to put the Canadiens ahead, Jesperi Kotkaniemi put them up by two at 4:40.

Antti Niemi made eight saves on nine shots for Montreal before making way for Charlie Lindgren.

Blake Speers had a short-handed goal for the Devils in the first.

Eddie Lack made 13 saves and didn't allow a goal through 40 minutes before he was replaced by Mackenzie Blackwood.

CALGARY, Alberta, Kailer Yamamoto's second breakaway goal of the game broke a tie in the third period for Edmonton.

Yamamoto neatly slipped the puck through the pads of David Rittich after being sent in alone on a 120-foot pass from Ryan McLeod, snapping a 3-3 tie 6:07 into the final period.

Rookie centre Dillon Dube led the Flames with three goals, while Andrew Mangiapane had the other score.