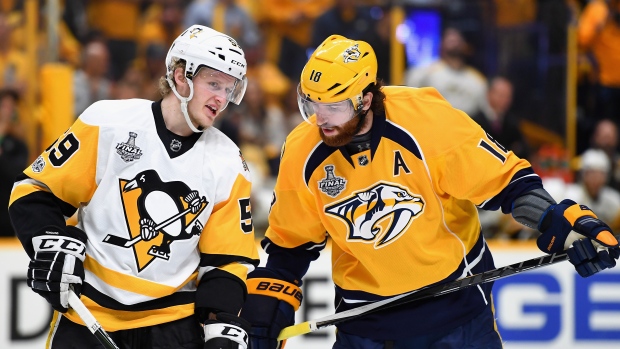 Colin Wilson had a hamstring injury while fellow centre Craig Smith was battling through a high ankle sprain, but still played every game of the Cup final.

Colin Wilson had a hamstring injury. James Neal played with a broken hand. Sustained it in Game 1 against Anaheim.

Neal scored one goal and added one assist in the final. He totaled six goals and three helpers in 22 playoff games.

In other injury news, Ryan Johansen, who was lost for the entire Stanley Cup Final after suffering a leg injury in Game 4 against the Ducks, is ahead of schedule, according to Poile. Johansen required emergency surgery on his left leg after taking a hit into the boards from Anaheim defenceman Josh Manson.

The 24-year-old was arguably the team's best forward when he went down, amassing 13 points over 14 postseason games. The Vancouver native scored 14 goals and 47 assists over 82 games with Nashville in 2016-17, his first full season with the club after being acquired from the Columbus Blue Jackets halfway through last season.

Johansen and fellow forward Viktor Arvidsson are both restricted free agent this summer. Poile says he will meet with both next week in Chicago to begin contract discussions.

Poile says he will meet with Johansen and Arvidsson's agent in Chicago next week to start that process.

Rookie forward Kevin Fiala only saw five playoff games after breaking his femur early in the second-round against the St. Louis Blues. However, he too is ahead of schedule.

The Preds did not have an immediate update on defenceman Ryan Ellis.

#Preds say they need a further medical update on Ryan Ellis before it's announced.