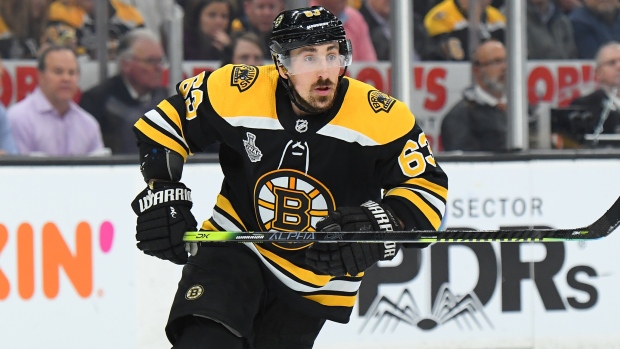 The National Hockey League released rosters for the 2020 All-Star Game on Monday afternoon. In recent seasons, the league has made significant changes to the format for the game – the midseason affair is now a division-based 3-on-3 tournament with rosters predominantly selected by the league’s hockey operations department, though fans do get a say when it comes to the selecting of each team’s captain and the ‘Last Man In’ vote.

For the most part, the hockey operations department does a good job of getting high-end players into the game, especially considering the limited number of roster slots (there are only 11 per team). There is also the constraint that each team must have at least one representative, which prompted a hilarious Tyler Bertuzzi quote last week.

I wanted to look at what the league got right and what the league missed when building these rosters, so using the same rules and operating constraints, I tried to select the same divisional rosters based on their individual contributions during the 2019-20 season.

My approach to selecting the rosters was a data-driven one, but attacked the goaltenders first, then taking care of the mandatory one-player-per-team requirement, then filling out the rest of the roster based on performance. I’m using scoring rates, impact to team performance in the standings, and regression methods like Goals Above Replacement (“GAR”) values to assess production to date.

Let’s start with the Atlantic. What changes would I make?

The single most important tweak you could make to the Atlantic roster is bringing in Bruins forward Brad Marchand. Marchand has an astonishing 59 points in 41 games, which is tied for the team-lead with the much younger (and league selected) David Pastrnak. But the Bruins simply have been a better team with Marchand on the ice than Pastrnak, season-to-date, and that’s especially true at even strength.

What makes it tricky for Pastrnak – who would slide into my ‘Last Man In’ vote – is that I think it would be quite hard to leave other Bruins off the team, too. The second biggest area of disagreement I would have with the selected roster is on the blueline, where I give the edge to Charlie McAvoy over the veteran Shea Weber. Not only has McAvoy put together a better season, but it’s an inefficient pick for a Montreal team that’s probably only going to be able to send one player.

The one player who deserves that nod is forward Max Domi, who has 30 points (10 goals and 20 assists), fourth best on the Canadiens roster.

Frederik Andersen gets the start, and if everything went to plan, Maple Leafs forward Auston Matthews would pick up the ‘Last Man In’ bid as the most deserving remaining skater.

On to the Metro:

Note: The table excludes Alexander Ovechkin, who was selected to the team but will not participate this year.

Number of matches: 5 out of 10 (50 per cent).
Biggest league snub: Semyon Varlamov, NYI

There was a pair of extremely difficult picks here when it came time to select forwards from the Islanders and the Flyers. I sided with the league in taking Mathew Barzal (16 goals and 18 assists) over Brock Nelson, but could have easily been talked into the other side of that argument.

I dissented with the Travis Konecny pick, if only because Sean Couturier’s all-situations play – and his body of work as a two-way player for years – gave him the slightest of edges over his 22-year old counterpart. It’s also worth noting that Konecny’s explosive season has not come courtesy playing the vast majority of his even-strength time with Couturier, a superstar who has consistently elevated the play of teammates for years. Where Konecny’s performance drops off a touch when moved away from Couturier, the opposite is not true.

The most glaring miss with the Metro roster actually came within the goaltending group. Braden Holtby, who has been sensational his entire career, is actually in the midst of his worst season – his 90.2 save percentage would be the lowest we have ever seen since he entered the league, and it’s obviously well below the league average at the same time. And it wasn’t as though Holtby was picked because the rest of the goaltending group is a tire fire. You could easily make the case that the 31-year-old Semyon Varlamov (92.0 save percentage, and 6.1 goals saved above average), along with the glut of New York’s young forwards under Barry Trotz, is one of the biggest reasons the Islanders have surged in the Eastern Conference playoff race.

Chicago is, perhaps along with New Jersey and Detroit, one of three teams that really didn’t deserve a single all-star. The league went the safe route in taking forward Patrick Kane, who comfortably leads the team in scoring (22 goals and 29 assists). But the issue with Kane for years now is that a lot of the offence that he does contribute gets washed away on the other side of the ice – the Blackhawks have been notoriously bad defensively with Kane on shift for years now, bleeding scoring chance after scoring chance from the middle of the ice: 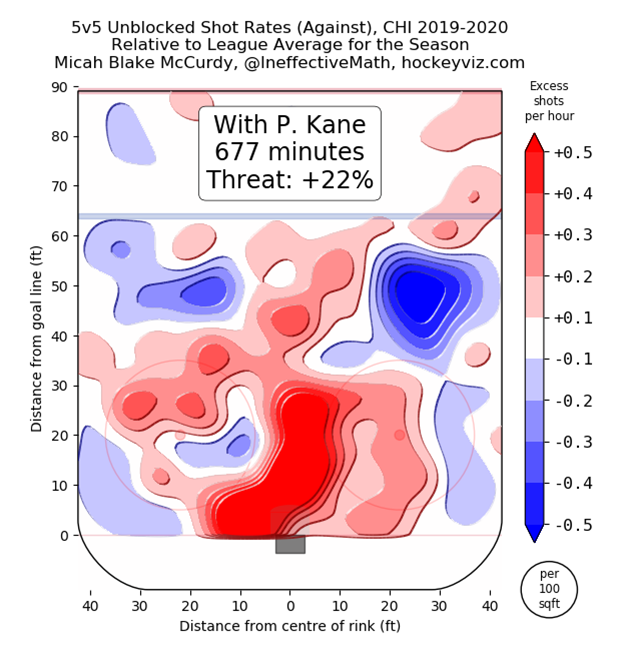 The challenge: If you don’t take Kane from the Blackhawks, then who? This isn’t a roster brimming with talent. That said, I think there’s a very good argument for his linemate Dylan Strome.

The biggest miss from this lineup has to be with Nashville’s Nick Bonino, who has become quite the analytics darling this season. Playing primarily with Craig Smith and Rocco Grimaldi, Bonino has ran up some of the league’s best on-ice goal differentials this season, and not surprisingly it’s because of how dominant a defensive forward he has been.

The Predators are giving up just 1.8 goals per 60 minutes (1.9 expected) with him on the ice at 5-on-5. Those numbers are so good that, despite otherwise average offensive performance, Bonino is driving net-goal differentials to an identical degree as teammates and perennial all-star candidates Roman Josi and Ryan Ellis. If you think elite defensive players should be recognized the same way elite offensive players are, well, here’s your opportunity.

One random note: I did go back and forth quite a bit as to whether to take Ben Bishop over Connor Hellebuyck. The Jets netminder has been slightly better this season, but Bishop has been great and that would have taken care of the mandatory player from a Stars team that hasn’t produced a ton of all-star candidates this year. (The forwards have been quite average, and their best skater, Miro Heiskanen, is looking up at Josi and Alex Pietrangelo.)

This division is uniquely tough because there are so many quality forwards to choose from and so few defensive counterparts. Add that to the fact that you pretty much have to take one forward from each of San Jose and Los Angeles (thanks, goaltenders), and you have probably the least efficient roster of the four divisions.

It forces names like Vegas’ Mark Stone (who loses a close battle with teammate Max Pacioretty) and Vancouver’s Brock Boeser (just outplayed by the likes of Elias Pettersson) off of a roster they probably should have made. Tomas Hertl (14 goals and 16 points) does deserve consideration, but for a San Jose team that has been unwatchable for most of the season, that’s a tough sell.

The league’s biggest miss in the Pacific probably centered on the Vegas Golden Knights – the league opted to take fan favourite Marc-Andre Fleury (91.3 save percentage), which was a miss for two reasons. The first is at the goaltender position, as all of Darcy Kuemper, Jakob Markstrom, and David Rittich have been better for the first half of the year. Selecting any two of those goaltenders would have ended the requirement for two teams, freeing up deserved forward positions for Pacioretty and Stone. Pacioretty and Stone have created the most formidable line in the division, but being only able to take one of the two, you have to give the edge to Pacioretty and his explosive offensive season (16 goals and 25 assists).

And it took a lot to leave Canucks rookie sensation Quinn Hughes off the blue line. He’d get very strong ‘Last Man In’ consideration, but thanks to the three California teams, Hughes will have to fight off the league’s best two-way forward in Stone. Good luck!