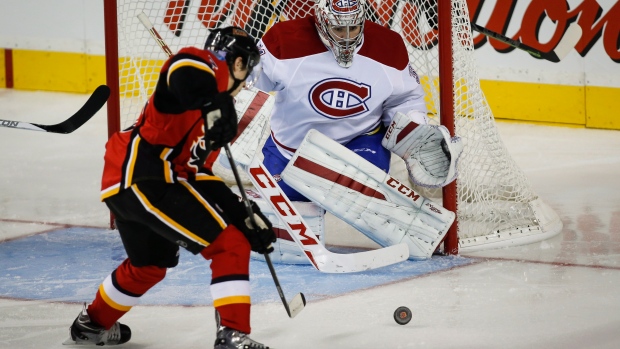 CALGARY - Carey Price had full confidence that P.A. Parenteau would score the winner in the shootout.

Parenteau did just that as he snapped a shot past Jonas Hiller to give the Montreal Canadiens a 2-1 shootout win over the Calgary Flames on Tuesday.

"He told me he was going to take care of business," said Price, who made 37 saves through regulation and overtime before stopping shootout attempts by Jiri Hudler, Sean Monahan and Johnny Gaudreau. "He said, 'I got this,' so I put my full trust in him and was halfway to the blue-line before he shot. He's got a great release. He really came up big for us there."

Hiller stopped shots by Alex Galchenyuk and David Desharnais in the shootout before Parenteau beat him to the blocker side to end the game.

"When you know you have the game on your stick, it makes a huge difference," said Parenteau, who added that he used his go-to move. "It makes you want to bear down and go home with those two points. That's what I did. I had my move in mind and luckily I worked for me."

Tom Gilbert also scored for the Canadiens (8-2-0), who had lost their previous seven games in Calgary.

"This has been a tough place to get wins," Price said. "They play us tough when we come to town. It took every ounce of effort to get this one. We're just happy we pulled it off."

Mark Giordano scored the lone goal of the game for the Flames (5-4-2), whose record fell to 1-1-2 during their current five-game homestand that will wrap up on Friday when they host the Nashville Predators.

"We played a good game," Giordano said. "We were skating all night, created a lot of opportunities. A few of us - myself No. 1 — had some really, really good looks down the stretch. Got to find a way to bury one of those ones. It sucks to lose in a shootout - always — but we can't be disappointed with that game."

Price had to be sharp early in the first period to stop a Kris Russell point shot during a Calgary power play that was tipped on net by Curtis Glencross.

"I got lucky a few times," Price said. "They do a pretty good job, especially Glencross, of being in front of the net. He tipped a couple."

Calgary then had a two-man advantage for 46 seconds with Montreal defencemen P.K. Subban and Alexei Emelin in the penalty box. Dennis Wideman had the best chance to score, but he blasted a shot wide of the net that bounced off the boards and out of the zone to end the threat.

The Canadiens had a chance to score a short-handed goal with Emelin still in the penalty box, but Lars Eller redirected a pass from Travis Moen high and wide of the Calgary net.

During a man advantage for Montreal, Hiller stopped a hard shot from the slot off the stick of Brendan Gallagher. Hiller then made a glove save to stop a breakaway attempt by Montreal forward Rene Bourque.

At the other end of the ice, Price stopped back-to-back shots by Monahan and Glencross to keep the Flames off the scoresheet during their third power play of the first period.

Calgary appeared to open the scoring early in the second when Mikael Backlund tapped the puck into a wide-open net, but the goal was waived off due the net being off its moorings.

The Flames continued to press and were rewarded when Giordano snapped a shot from the high slot into the top corner over Price's outstretched glove at 2:08 of the second. Giordano was set up by Gaudreau, who worked hard to keep the puck in the Montreal zone.

"The team was flying out there in the second and third periods," Gaudreau said. "That's the way we need to play the whole game. It was a great effort — goalie, defence, forwards. I think we should've come out with a win."

The Canadiens tied the game at 12:48 of the second when Gilbert intercepted a clearing attempt by Matt Stajan and quickly snapped a shot from a bad angle into the top corner behind Hiller, who was screened on the play.

At 12:32 of the third, Stajan had to be helped off the ice after a knee-on-knee collision with Montreal defenceman Jarred Tinordi, who received a minor penalty for kneeing.

David Jones, who missed the past eight games with a lower-body injury, had a great chance to score for the Flames during the man advantage, but was denied by Price, who made a pad save before covering up the puck.

In overtime, Price stopped Gaudreau at one end of the ice before Hiller returned the favour by standing his ground to deny a scoring attempt by Gallagher.

Price then made a nice glove grab to snag a shot from the slot by Giordano before Hiller stopped a point blast by Subban to send the game to the shootout.

Notes: Brandon Prust played his 100th career game with the Canadiens. A third-round draft pick of the Flames in 2004, Prust suited up for 78 games with Calgary between 2006 and 2010. … Calgary forward Joe Colborne left the game in the second period with an upper-body injury and didn't return. … Linesman Darren Gibbs was honoured before puck drop for working in his 1,000th NHL game.