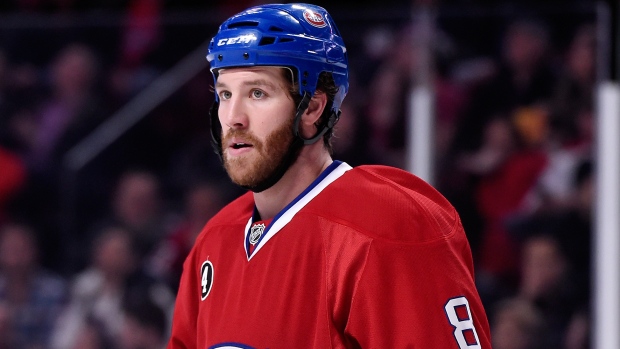 Prust claims that Watson, 43, verbally assailed him following a roughing penalty late in the first period.

"I thought the original call was kind of soft and I let him know on the way to the box," said Prust.

Watson assessed Prust a two-minute unsportsmanlike conduct penalty on top of the original minor when the pair appeared to exchange words, but Prust claims that their interaction was initiated by the referee.

"He kept provoking me," said Prust. "He came to the box and called me every name in the book. He called me a piece of you-know-what, a mother-effer, a coward and said he'd drive me right out of this building. I kept going, 'Yeah, okay. Yeah, okay. Yeah, okay.' He kept on me. He kept on me. I kept saying, 'Yeah, okay.' I wasn't looking at him. He teed me up. That's the ref he is. He tries to play God. He tries to control the game and he did that tonight."

At the end of the third period, with the gane well out of reach, Prust was assessed a five-minute fighting major for a tilt with Bolts defenceman Braydon Coburn, as well as a tripping minor for bumping Bolts goaltender, Ben Bishop, a 10-minute misconduct and a game misconduct. The 31-year-old Prust finished his night with 31 minutes in penalties. He also chipped in an assist.

Tampa coach Jon Cooper thought Prust might have been trying to injure Bishop on the play.

"You have to kind of think (Prust) is going in there for one reason, right?," said Cooper. "He wasn't going to get the puck from him. He had one thing on his mind and it was probably to make sure he injured him. Whether that's the case or not, I don't know."

Prust claimed that such an assertion couldn't be further from the truth.

"I barely touched him," said Prust of Bishop. "He flopped like he normally does. It was nothing."

With the Lightning leading the Eastern Conference second round series 2-0, the action shifts to Florida and Game 3 on Wednesday night.

- With files from The Canadian Press