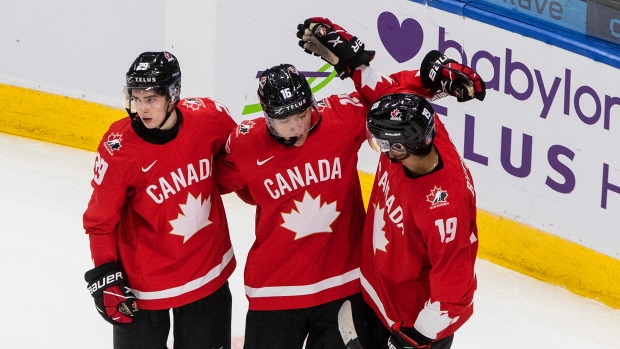 All it took was some time on the ice for Quinton Byfield to get back up to speed.

“Definitely in camp not playing hockey for eight-to-nine months definitely affects you a little bit," Byfield said after Team Canada’s 10-0 rout of Switzerland Tuesday night. "I had to ease myself into it a little bit, almost, and I’ve found my footing.”

After recording just one assist through two tournament games, Byfield exploded for a pair of goals and added four assists as Team Canada dominated Team Switzerland to remain undefeated at the 2021 IIHF World Junior Hockey Championship.

Selected second overall at the 2020 NHL Draft by the Los Angeles Kings, expectations were high on Byfield and five other returning players that won gold for Canada at the 2020 World Juniors in Ostrava, Czech Republic. Although the team had scored a combined 19 goals through two tournament games, Byfield's absence on the scoresheet stood out.

"I told every returning player I was going be extra hard on them," Canada head coach Andre Tourigny said. "We asked Q to make adjustments and he's responded. He's a more mature man than last year."

Devon Levi picked up his first shutout of the tournament with 15 saves despite not being tested for much of the night.

Switzerland (0-0-0-3) struggled to generate an attack against Canada.

Canada, looking to reignite their offence following a 3-1 win over  Team Slovakia on Sunday, struggled in the early going to get their power play on track. In the first period, they had a two-man advantage for 1:12 but were unable to beat Patenaude.

Canada wasted no time getting on the scoresheet at even strength. Tomasino scored in his third consecutive game to give Canada a 1-0 lead. A shot from a far distance beat Patenaude over his blocker. Byfield and Quinn picked assists at 1:30 of the first period.

Despite outshooting Switzerland 13-3 after 20 minutes, Canada's lead was just 1-0.

After going 0-3 in the opening frame, Canada busted through on the power play in the second period.

Cozens deflected a rebound from Perfetti's quick shot and picked up his rebound before beating Patenaude, and Canada took a 2-0 lead. McMichael picked up a secondary assist at 1:40.

Pelletier made it 3-0 after he picked up a bounce off the boards from Connor Zary. Byfield picked up his second assist for his second point of the game at 8:02.

The floodgates had opened as Suzuki scored on the power play at 13:44. Byfield collected his third assist on the night and Alex Newhook picked up the secondary helper.

Cozens picked up his second point of the night on a centring pass to McMichael for a quick shot to make it a 5-0 lead at 17:53.

"That was our best period, no doubt about it," Tourigny said of the third.

Byfield continued his offensive output in the third period. He scored Canada's third power-play goal of the game on a deflection in front of the net at 5:16.

Byfield added his second goal of the game and fifth point of the night less than three minutes later.

Byfield had just one assist through two games at the World Juniors before his productive night on Tuesday.

Canada will face its toughest challenge yet when they take on Team Finland to finish preliminary round action on Thursday.

Switzerland has scored just one goal through three tournament games and needs a regulation win over Team Germany in their final game to avoid elimination.

NOTES: Canadian defenceman Braden Schneider returned to the lineup after serving a one-game suspension for his illegal check to the head of Jan-Luca Schumacher in their 16-2 win over Germany over the weekend. Forward Dylan Holloway also returned after missing the team's 3-1 win over Team Slovakia on Sunday due to an upper-body injury.