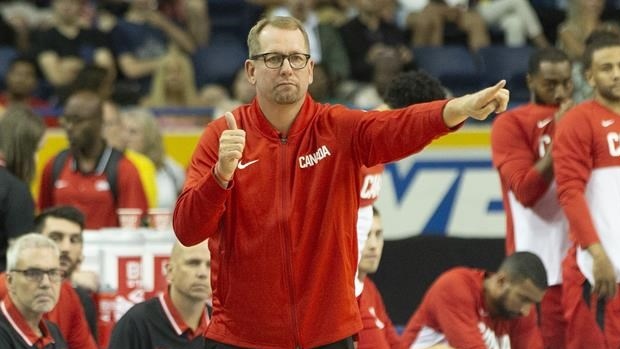 The Toronto Raptors head coach said he's "100 per cent" committed to coaching Canada's men's team when it continues its push for a spot at next year's Tokyo Olympics.

"Really looking forward to it, and . . . hopes and prayers that things will be rolling by next summer when we're going to be able to go to Tokyo and play," Nurse said on a conference call Friday.

Canada was set to take part in a last-chance qualification tournament in late-June in Victoria, but it was postponed due to the COVID-19 pandemic.

Nurse was named Canada's head coach on June 24, less than two weeks after guiding the Raptors to their first NBA championship, but his contract was only through the 2020 Olympics, which have been pushed back to open July 23 of 2021.

The past few weeks Nurse has juggled his Raptors duties with calls with Canada Basketball and the Canadian Olympic Committee for planning purposes.

"And we're touching base with the players, we're getting ready to have them all on a team-wide call altogether here next week, just to touch base and keep some connection ad keep people together a little bit," Nurse said. "Also conveying those same messages — to stay healthy and stay as fit as best you can, and when the time is right we'll get back to work and reconvene."

Canada Basketball president and chief executive officer Glen Grunwald said FIBA has given assurances that Victoria will remain as host when the tournament takes place next year. A Canadian team missing most of it's NBA-calibre talent failed to lock down an Olympic berth at the World Cup in China last September, but numerous NBA stars had committed to the last-chance tournament including Jamal Murray, RJ Barrett and Shai Gilgeous-Alexander.

Mavericks star forward Dwight Powell, who ruptured his Achilles tendon in January, told The Canadian Press on Thursday that he's excited to contribute to the national program next season.

Nurse and the Raptors were on the front line of the NBA shutdown, playing in Utah just two days before the Jazz announced on March 11 that Rudy Gobert had tested positive for the coronavirus. The league shuttered before the day ended, and the Raptors players and staff went into self-isolation.

"It hit really close to home because it was a member of really the NBA family right . . . as everybody knows we just returned from (Utah), so I think the immediacy of it, and the closeness of it made it very serious for all of us," Nurse said. "I shifted into the mode of: let's do what we're supposed to do, let's get home and stay home."

Despite a roster riddled with injuries this season, the Raptors were second in the Eastern Conference (46-18), had just locked up a playoff spot, and went 4-1 on a west coast road trip.

There has been speculation about what the resumption of the NBA season might look like, including a shortened post-season in a neutral city like Las Vegas.

While Nurse reiterated team president's Masai Ujiri's message from two days earlier — that global health is more important right now than basketball — the coach said the Raptors would be ready to return to finish the season in whatever format.

Does his team's success have him wishing for at least some kind of post-season?

"This is a really good team, and it's a really fun team to coach, and I think about it in terms of . . . it's a shame that we don't get to be around each other and play some games and keep this thing going a little bit," he said. "Shoot, I could coach these guys 12 months a year, just keep on going, they're fun to be around, and fun to coach and they compete and they're tough, and they figure it out, and it's a true joy, and they are missed, there's no doubt about it."

Nurse said his days are busy despite the league's suspension. He has two kids at home: a baby who'll be one in May, and a three-year-old. Spending time with them has been "really fantastic." He's working out more, and spending more down time playing the piano and guitar. He's hoping to learn Portuguese (his wife is Brazilian).

He said the communication between the team has actually increased since the league was suspended through FaceTime, etc. A member of the Raptors' medical staff checks in with each player daily. The training staff is providing workouts whether it's on a bike or with dumbbells, through platforms like FaceTime and Zoom. They're monitoring players' weight, "just making sure guys are staying fit and staying healthy and all those things," Nurse said.

A member of the coaching staff is in contact with players every couple of days to specifically talk "basketballs and ball-handling and if they've got a hoop in their driveway they go out and shoot or whatever, anything they can do to keep some feel for the ball, and we send some film," Nurse said.

Nurse has watched games on replay, and said it's given him "thoughts and ideas about things that you're doing."

"I haven't dove real deep into anything yet though, to be honest," he said. "(The staff) has been on conference calls a lot, we're starting to divvy up some projects, just for staying sharp and professional development and things to do.

"But again, it's so far away from like the importance and focus of what I would probably like to convey to anybody right now, to be honest."