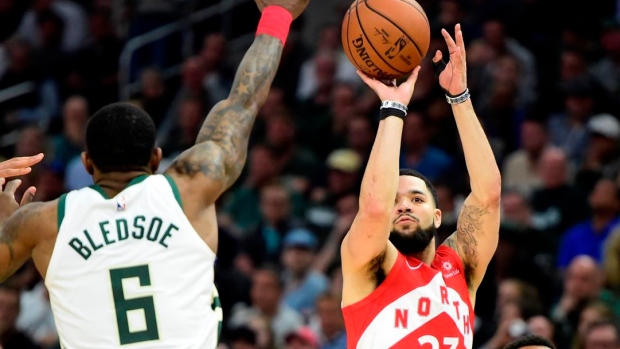 With the National Basketball Association on hold for the foreseeable future, TSN and Sportsnet are airing the entirety of the Toronto Raptors’ playoff run to the 2019 NBA title. You can watch Game 2 of the Eastern Conference Finals against the Milwaukee Bucks Thursday night on TSN4, TSN5, TSN.ca, the TSN App and on TSN Direct at 8pm ET/5pm PT or listen on TSN Radio 1050 Toronto.

Things were looking good for the Toronto Raptors through the first three quarters of the Eastern Conference Finals.

And then everything fell apart.

The Milwaukee Bucks outscored the Raptors 32-17 in the final frame on their way to a 108-100 Game 1 victory at the Fiserv Forum. Toronto had a two-point lead with 3:30 left in the contest but missed their final eight shots. Point guard Kyle Lowry was the only Raptor to score a field goal in the entire fourth quarter as his teammates shot a hideous 0-of-15.

Against a lesser opponent the Raptors might have been able to get away with a fourth quarter dud – but not against the team that finished the regular season a league-best 60-22.

“Fourth quarter killed us, 32-17,” Lowry told reporters. "They outplayed us in that fourth quarter. They got a little bit more aggressive. They made some big shots, made some big plays. It sucks when you lose like that. But we had our chance and we've got to learn from it."

"We got to look back at it and learn but we can't think too much about it. You come out Game 2 and try to win. You can't replay this one,” Raptors centre Marc Gasol said.

The loss stings more considering how effective Lowry was, shooting 10-of-15 from the field including 7-of-9 from deep on his way to a playoff-high 30 points. All the while battling a thumb injury sustained in Game 7 of the conference semi-finals against the Philadelphia 76ers.

In addition to 24 points and 14 rebounds from Giannis Antetokounmpo, Milwaukee’s run was led by centre Brook Lopez, who connected on four three-pointers and scored 13 of his team-high 29 in the final frame – pretty good considering he had just 27 the entire series before against the Boston Celtics. Lopez also held Toronto’s big men in check as Serge Ibaka and Marc Gasol combined for just 10 points on 4-of-17 shooting.

Ibaka was quick to point out he needed to give his team more.

"Personally, I think I need to do a better job," Ibaka said. "I know every time I bring my energy my teammates feed off that. I didn't bring that last night. I'm going to do better next game."

Through the first 13 games of the playoffs, Toronto is 6-0 when Ibaka scores 10 points or more and 2-5 when he doesn’t. So getting more from him could be key in Game 2.

Still, the Raptors insist they are dwelling on what’s behind them.

"You just put it aside and move on. Next game, man," forward Pascal Siakam said. "It's going to be an interesting series. We had a chance to win tonight. We felt like we could have got this game... it's a long series."

Here's what TSN's basketball analysts had to say about Game 2 versus the Bucks.

“A night like this made the Game 1 loss sting even more. They should’ve had that one. This one was never really close. The Raptors were thoroughly outplayed from start to finish. Things looked bleak. “Where do you go from here?,” some doofus asked Kawhi after the game. “To Toronto for Game 3.” He never lost confidence.”

“Bucks were fabulous, scoring 125 points with 27 assists on 43 FG’s. Kawhi & Norman Powell are the only Raptors shooting 50%+. Need more help. Moment of truth has arrived.”

“Incoming message from the Bucks: Dunk, block, and dunk. Message received, tone set in the first 3 possessions. The Raptors struggled to catch their rhythm in game 2.  On the bright side, they return home with a chance to swing the momentum back in their favour. One thing we know for sure, the Raptors will never be outplayed again in this series.”

“There is no way to sugar coat this one… it was U.G.L.Y! A glimmer of hope from Kawhi and Norm, but this was a dismantling by the league’s best team. I remember being on the sideline thinking “just make it end”! Toronto didn’t have it and desperately needed to get back home.”

“By this point, all of this looked like the Cavs series from the postseason before. It was as if the game 1 loss carried into game 2, and the Raptors took themselves out of the mix before tip off. The Bucks just ate their food. No way around it. Giannis and the Bucks complimentary players were rolling and the Raptors didn’t have a response. When the trio of Ersan Ilyasova, Malcolm Brogdon (how do you let someone like that go?!) and George Hill are outscoring four of your five starters – no good can came come of this.”

“This was the "uh oh" game. The second time this postseason that a sliver of doubt may have crept into the collective psyche of Raptor nation. Game started with a Giannis putback slam and the tone was emphatically set. Wire to wire it was all Bucks, and the first time Raps were down two games in these playoffs. Kawhi had no support. Kyle was frustrated and Gasol looked lost. Bucks bench led by Eddie Munster lookalike Ersan Ilyasova was the main story. Only thing left to do is head home - chin up - put some “Journey” into your head phones and close down a Milwaukee bar which we did quite effectively.”

“Toss game 2 out the window! Giannis dominated and Nick Nurse admitted his team “didn't do much well tonight”. Many teams would be worried down 0-2...but “Fun Guy” Kawhi Leonard said it best when asked where the Raptors go from here, “I’m gong to game 3 in Toronto.” Time to get defend home court.”