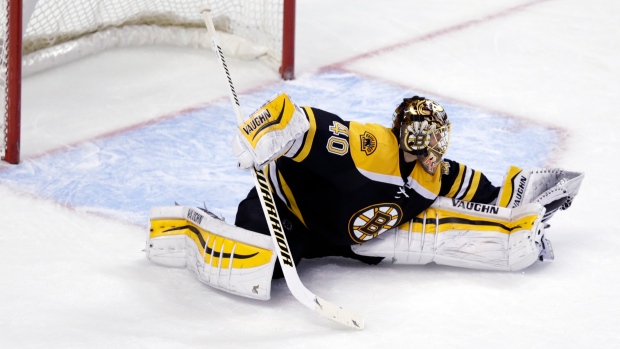 BOSTON - It didn't take long for Boston Bruins goalie Tuukka Rask to get tested. His strong start made it a rough night for the New York Rangers.

Rask made 30 saves for his second shutout, Patrice Bergeron scored a first-period goal, and the Bruins won their fifth straight by beating the Rangers 3-0 on Thursday night.

"Yeah, you get a couple of tough chances early on and it gets you in the game," Rask said. "The past couple of games we've been doing a good job of closing in on their point shots and not giving those opportunities. That helps me when I see the puck and get those clear looks."

Last season's Vezina Trophy winner was sharp and so were his teammates.

"He was really good for us tonight," coach Claude Julien said. "This team has a lot of speed — the Rangers — and we acknowledged that before the game. They displayed that, at times, when there was the odd breakdown and when they had a chance to score, Tuukka was up to the task. Without a doubt in my mind he was the best player."

The Rangers have lost 3-0 in consecutive games after winning five straight and 13 of 14.

"I think anytime it goes two games, no matter what the score might be, I think we ought to get back to the basic, back to simple hockey, the way we were playing when we were winning," Rangers forward Rick Nash said.

Cam Talbot made 29 saves for the Rangers, with top goalie Henrik Lundqvist getting the night off. New York began of stretch of three road games in four days. Talbot also played the third period of Tuesday night's home loss to the New York Islanders.

"You can't overthink it," Rangers forward Martin St. Louis said. "We got it going pretty good, but by no means are we thinking that, 'Hey, you know, let's lay off a little bit.' No, we're trying to win games. We're playing some tough teams in tough buildings and we're going to bite, scratch, claw, whatever trying to get some wins here heading into the break."

The Bruins have earned at least a point in their last eight games against New York (6-0-2).

With Boston leading 1-0, Krejci redirected defenceman Krug's pass behind Talbot 2:49 into the second period. Krug wound up for a slap shot, but instead sent a perfect pass to Krejci at the top edge of the crease.

The Bruins took a 1-0 lead on Bergeron's goal four minutes into the first. Defenceman Dougie Hamilton fired a shot from the left point, and Talbot mishandled the rebound before Bergeron slipped the puck between his pads.

The Bruins owned a 13-7 edge in shots after one period, but the Rangers had much better chances.

"I thought Tuukka played unbelievable," Boston centre Chris Kelly said. "He was our best player tonight and he has been for a while and that's good to see."

Rask made a pair of stellar stops about two minutes apart after Bergeron's goal. The first came when former Boston College star Chris Kreider broke in alone down the left wing, cut in front, but was robbed by Rask's left pad.

On the second bid, Lee Stempniak took a pass and broke in alone, but Rask dropped to make a pad save. Carl Hagelin also hit the post at the end of a 3-on-2 break.

In the second period, Nash had a clean breakaway but fired a wrister over the net.

NOTES: Rangers top-line centre Derek Stepan missed the game because of an upper-body injury sustained in Tuesday's loss. ... Boston general manager Peter Chiarelli announced that RW David Pastrnak will remain with the team for a 10th game, thus burning a year of his entry-level contract. ... Talbot came in with 4-3-1 record, but three of the wins were shutouts. ... Krejci's next point will be his 400th.