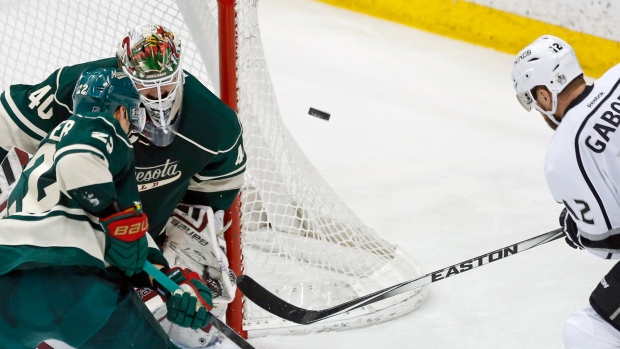 ST. PAUL, Minn. - The Minnesota Wild were humbled by their four-game sweep in the second round of the NHL playoffs by division rival Chicago.

That doesn't mean they'll be moved to make major changes to their roster this summer.

As they gathered at the arena on Monday for the last time for a while, Wild players and leaders said they believed they had enough skill, grit and depth to win that Western Conference semifinal series against the nemesis Blackhawks.

General manager Chuck Fletcher put the pressure on himself to make the right tweaks to put the Wild in better position to advance further next year.

"We're disappointed and, really, a little stunned it ended so quickly," Fletcher said.

At the top of Fletcher's to-do list will be goalie Devan Dubnyk, who can become an unrestricted free agent on July 1. The lifeline for a sinking season came in the form of the lanky 29-year-old, who was acquired from Arizona for a third-round draft pick on Jan. 14. Dubnyk posted a 1.78 goals-against average in 39 games for the Wild after the trade.

"There's no secret that I've enjoyed my time here and want to be here, so there's no point in hiding that," Dubnyk said, "and I'd be happy to be here going forward. I'm certain we'll do everything we can going forward to make sure that happens."

The power play will be a significant item for coach Mike Yeo to tend to.

The Wild scored seven goals in 23 opportunities, a 30.4 per cent conversion bettered only by Anaheim among the 16 playoff teams to date.

But at 15.9 per cent, the Wild had the fourth-worst power play in the league during the regular season. In Game 4 against Chicago, Yeo shuffled the groups, putting defenceman Matt Dumba and centre Mikael Granlund on the first unit in place of struggling wings Jason Pominville and Thomas Vanek.

Defenceman Ryan Suter said he wished the change would've been made sooner.

"The power play is like an individual. I think when it's feeling good, we're going good," Vanek said. "And I think when we're struggling, we press a little too much."

The most troubling trend for the Wild in the second round was a lack of goals by their top forwards. They wouldn't have made the playoffs without the balance provided by Zach Parise, Mikko Koivu, Charlie Coyle, Jason Zucker, Nino Niederreiter, Granlund, Pominville and Vanek. But for all their talent there might not be an elite scorer in the group such as the Blackhawks have taunted the Wild with in Patrick Kane the past three years.

With Niederreiter, Zucker, Coyle and Granlund up front and Jonas Brodin and Dumba on defence comprising an under-25 core, the Wild ought to be well-positioned for sustained competitiveness.

But with leaders Parise, Suter, Koivu, Pominville and Vanek all 30 and over with big contracts, the window for winning a championship isn't necessarily wide open.

"Obviously, with failure you always try to find something to fix and adjust, to help the next time, but I think minor adjustments," Suter said. "I think we had the group of guys in here to go further than we did."

Certainly, some of the contributing players won't return.

Centre Kyle Brodziak, right wing Chris Stewart and defenceman Jordan Leopold are among the unrestricted free agents. Stewart missed the end of the second round because of a separated right shoulder.

Granlund and centre Erik Haula will be restricted free agents. Decisions must be made on whether to bring back goalies Darcy Kuemper and Niklas Backstrom, but there's no way both of them will return. Defenceman Keith Ballard might retire, because of concussion symptoms that have persisted since his injury on Dec. 9.

Whatever the lineup looks like next fall, well, the Wild will be out to establish the consistency they've lacked the past three seasons.

"I'm not going to sit up here and say that we lost because of fatigue, but I do think that that's something that we have to learn from in the regular season, kind of setting yourself up maybe a little bit better going into the playoffs," Yeo said. "Another pretty important thing: It'd be nice to have home ice too in the playoffs. That's not something we've had yet."