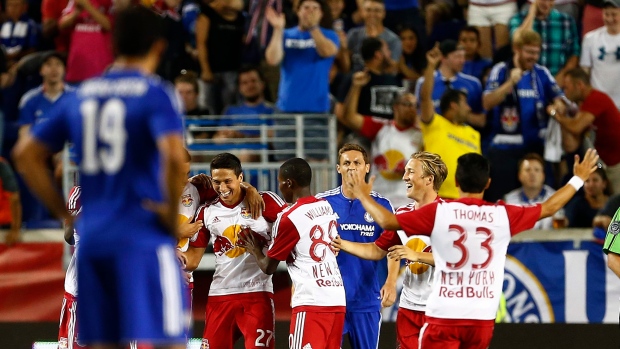 Sean Davis scored twice and Franklin Castellanos had a goal and an assist to help the team with only four players who have any minutes in MLS this season upset the 2012 European champions and five-time English league winners.

"We hit the post two or three times. I don't know, but they're young guys, they have quality, and motivation, their motivation is really high to play against us."

Loic Remy gave Chelsea the lead midway through the first half, but Castellanos equalized in the 51st minute, 16-year-old Tyler Adams added a header and Davis tacked on two more to rally New York and stun the near capacity and largely blue-clad crowd of 24,076 at Red Bull Arena.

This is the third time in four years Chelsea has toured the United States before beginning its season and the second time it has competed in the exhibition International Champions Cup with several other top European clubs.

Using a starting lineup of several regulars and three players returning from loan, the Blues had the better possession and chances, outshooting the Red Bulls 12-4 in the first half.

Remy, who scored seven goals in 19 league appearances last season, gave Chelsea the lead when the Blues caught the Red Bulls on a counter.

Substituting liberally to begin the second half and inserting Eden Hazard, John Terry and Nemanja Matic, Chelsea continued to dominate the second half. But Terry's miscue enabled New York to even the match.

Castellanos raced after Terry's weak back pass to substitute goalkeeper Asmir Begovic, who tried to clear the ball with a slide tackle, won the ball and scored into an open net.

Chelsea continued to push forward and Diego Costa put a header off the post in the 62nd, but Castellanos curled a cross into Adams, who headed it in seven minutes later.

Davis, who has one assist in six games this season with the Red Bulls' first team, wanted to trade jerseys with Matic after the game but lost his opportunity when he got pulled aside for a television interview.

"I think I'll keep my jersey tonight. It'll be enough," Davis said. "I'm pretty happy with that. Two goals is a good trade off."

New York used a starting lineup more than half of which came from its USL minor league team Red Bulls II, which has won seven of 18 games this season.

The Red Bulls used a developmental roster after playing and losing on penalties on Tuesday to the Philadelphia Union in the U.S. Open Cup quarterfinals.

Chelsea will play Paris Saint-Germain on Saturday and Barcelona on July 29 before returning to England to play in the Charity Shield against Arsenal on Aug. 2 and a friendly against Fiorentina on Aug. 5. It will begin the English league season on Aug. 8.

This story has been corrected to show that the Charity Shield will be played Aug. 2, not Aug. 5.