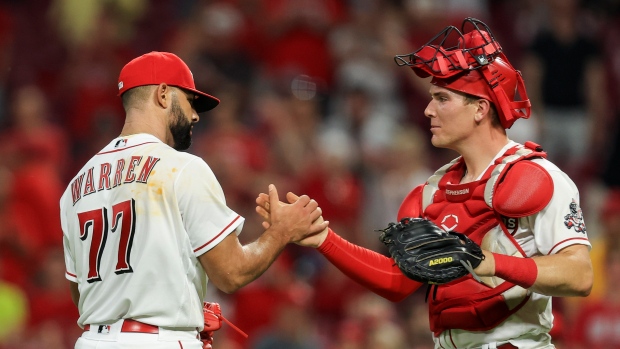 CINCINNATI (AP) — The Reds hit five homers over the first five innings, including a three-run blast by Joey Votto, and Cincinnati extended the Colorado Rockies' road woes with an 11-5 win on Friday night.

Nick Castellanos, Scott Heineman, Kyle Farmer and Tyler Stephenson also went deep against Kyle Freeland (0-2), who set a career high for home runs allowed in a game. The Reds fell one short of matching their single-game season high for homers.

The Rockies fell to 5-25 away from Coors Field and have lost every road series this season.

Cincinnati gave Tyler Mahle (6-2) a 9-0 lead before he faltered in the sixth, allowing a run on a wild pitch before Ryan McMahon hit a three-run homer. Mahle allowed four runs on five hits in six innings, retiring 12 straight batters in one stretch.

With Jesse Winker on first, Castellanos lined Freeland’s fifth pitch of the game into the first row of seats in deep right-center for his 13th homer of the season.

Eugenio Suárez led off the second with a double, and Heineman followed with his second homer of the season. Votto broke the game open in the third with his seventh homer, an opposite-field shot that followed third baseman McMahon's error on a potential double-play ball.

Farmer homered leading off the fourth and Stephenson ended Freeland's night when he went deep leading off the fifth. Freeland previously had allowed three home runs in a game three times. He gave up nine runs (eight earned) on eight hits.

The Rockies had seven hits. They came in batting a major league-worst .202 as visitors, while their home average of .277 leads the majors.