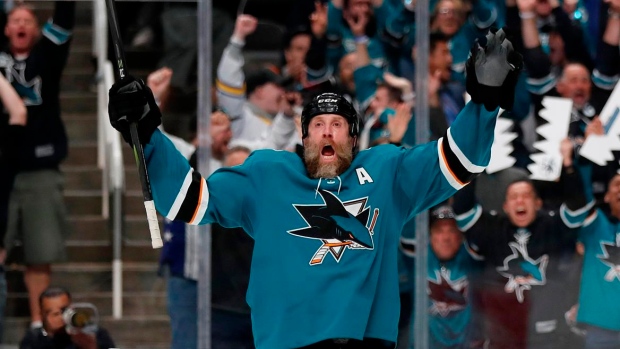 Joe Thornton announced his intentions to return for a 22nd NHL season in June and according to Kevin Kurz of The Athletic, it is only a matter of time before the veteran re-signs with the San Jose Sharks.

Kurz writes that "Thornton is not going anywhere and will re-sign with the Sharks at some point in the near future," though he may wait until Sharks general manager Doug Wilson is done shaping his roster for this season.

Thornton, who posted 16 goals and 35 assists in 73 games, said in June he believes he could play up to five more seasons. The 40-year-old was pictured in full gear at the Sharks training facility on Monday along with former teammate Patrick Marleau.

Marleau, who was bought out by the Carolina Hurricanes in June, has also been linked to the Sharks this off-season, but Kurz reports there's "much more uncertainty" around his future. The 39-year-old desired a move from the Toronto Maple Leafs after last season in order to be closer to his family in San Jose, but Steve Simmons of the Toronto Sun wrote last week that the Sharks "don't want" the veteran.

A veteran of 21 seasons, Marleau scored 16 goals and added 21 assists in 82 games last season and added a pair of assists in seven playoff games. Marleau said in June he believes he could play even beyond the 2019-20 season.

Both have been Sharks captain and are the top two in team history for every major offensive category.

According to CapFriendly, the Sharks have $4.68 million in cap space remaining for this season with 11 forwards under contract.