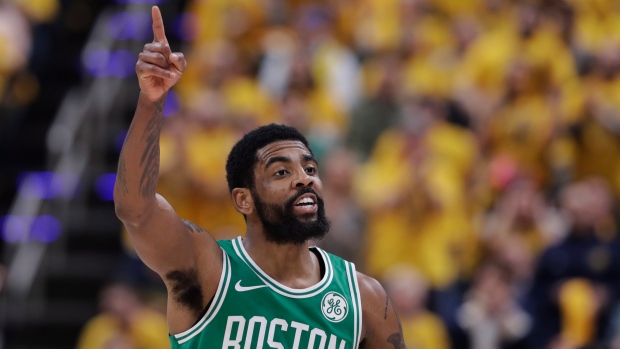 Could a LeBron James-Kyrie Irving reunion be in the works?

The Los Angeles Lakers are "swinging for the fences" on Irving now they they've opened another max contract slot, according to Marc Stein of the New York Times.

Kyrie Irving remains as much a target for the Lakers as Kawhi Leonard, league sources say, now that the Lakers are sure they can open maximum cap space. They are swinging for the fences despite all of the signals that have pointed Irving to Brooklyn ...

Stein adds that Irving seems as much of a target for the Lakers as Kawhi Leonard despite all signs pointing toward Irving and Kevin Durant landing in Brooklyn.

The Lakers opened another max contract slot on Thursday by expanding the Anthony Davis trade to include the Washington Wizards. The move, which sent Mo Wagner, Jermerrio Jones and Isaac Bonga to D.C., gave general manager Rob Pelinka an additional $32 million in cap space.

Outside of the Nets and Lakers, Irving has also been linked to the New York Knicks in free agency. He averaged 23.8 points per game in 67 regular season games last season with the Boston Celtics.

Meanwhile, the Lakers are expected to also meet with Kawhi Leonard, though ESPN's Adrian Wojnarowski reports the incumbent Toronto Raptors will be allowed to pitch the two-time Finals MVP last.

Should the Lakers miss on adding another superstar, ESPN reports they could split the money up and go after other free agents like Seth Curry, Danny Green, Terrence Ross, or "several other free agents with strong shooting ability."