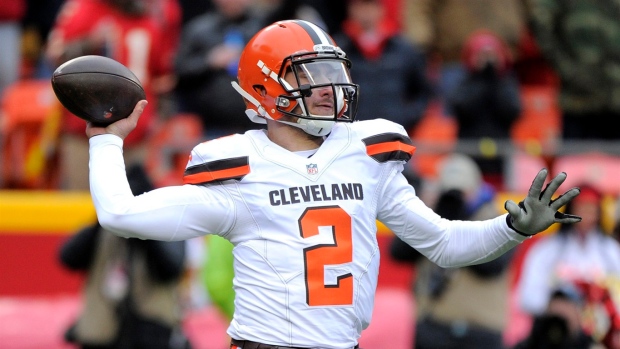 Quarterback Johnny Manziel may have interest in the Canadian Football League according to a report from ESPN.

When asked about the possibility over the weekend, Manziel said the CFL was “definitely something I’ve looked into,” but he still has hopes to make it back to the NFL.

The 0-6 Hamilton Tiger-Cats own his negotiation rights.

Manziel was a college standout at Texas A&M – winning the Heisman trophy in 2012 – before struggling mightily in two seasons with the Cleveland Browns. He was released in March of 2016 and has not played a down of professional football since.

But Manziel isn’t ready to walk away from sports, even if his playing days are behind him. He says his next step may also be coaching.

"I'd do something involved with sports. I can't get away from it," Manziel said at the International Football Betting Conference in Costa Rica. "I've had to ask myself that a little bit as of late over the past year, but at the same time I'd want to be involved in sports in some way, whether it's coaching, whether it's doing something like that. So I think that'd be my route."

The 24-year-old specified that he “probably” sees himself coaching at the collegiate level.

While he doesn’t have much coaching experience, Manziel was a coach at the Elite 11 quarterback camp in Miami in February.