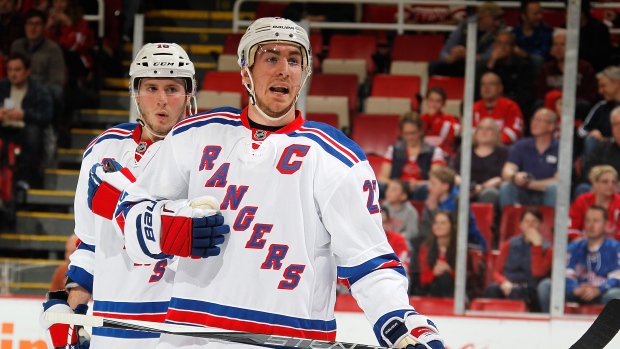 Ryan McDonagh was skating on a broken foot when the New York Rangers exited the playoffs last year.

This year, he is set to enter the playoffs with a small break of the metacarpal bones in his right hand, according to the New York Post.

The Rangers have already ruled McDonagh out for the remainder of the regular season, but, according to Larry Brooks of the Post, the team's captain is "all but certain" to miss some time in the playoffs.

The metacarpal bones connected to the wrist bones and finger bones, on the back area of the hand.

McDonagh was injured in the first period of Monday’s victory over the Columbus Blue Jackets when he was hit in the back of the hand by a Brandon Dubinsky shot. He finished the period but did not return for the remainder of the game.

The St. Paul, Minnesota native appeared in 73 regular season games this season for the Rangers, scoring nine goals and adding 25 assists with a plus-26 rating.

The victory clinched a playoff spot for the Rangers.

The Rangers won their first game since the injury on Tuesday, with a 3-2 victory over the Tampa Bay Lightning.