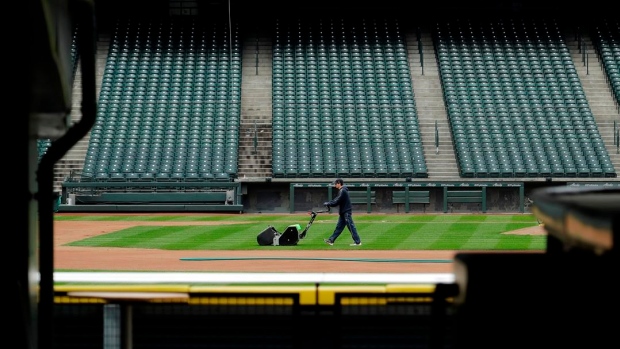 Major League Baseball is working with a former Centers for Disease Control and Prevention official as it tries to formulate a plan on how to begin its 2020 season according to The Athletic's Ken Rosenthal.

Rosenthal writes that Dr. Ali S. Khan is serving as MLB's lead medical consultant. He spent almost two decades at the CDC and is now the dean of the college of public health at the University of Nebraska Medical Center.

Earlier this week, commissioner Rob Manfred told reporters the league was going to turn over every stone possible to try and have a season in 2020.

While no plan has been concretely revealed to the public, multiple reports indicate baseball is considering a scenario where all 30 teams would play at neutral site spring training facilities in Arizona, as well as Chase Field in Phoenix, home of the Arizona Diamondbacks. The plan would also include off-the-field infrastructure for keeping players and staff healthy.

Bob Nightengale of USA Today reported earlier this month MLB was considering a plan also involving spring training facilities in Florida, where Marlins Park in Miami and Tropicana Field in St. Petersburg could also be used in addition to locales in Arizona.

Games would likely take place without the presence of fans and could also include in-game social distancing according to a report from Rosenthal last week.

Dr. Anthony Fauci, the United States’ top infectious diseases expert, said on Wednesday there is potentially a way of resuming sports in the summer, as long as no fans are in the stadiums.

"There’s a way of doing that," Fauci told Peter Hamby on Snapchat when asked about an abbreviated baseball season and the start of a football season. "Nobody comes to the stadium. Put [the players] in big hotels, wherever you want to play, keep them well surveilled."

"Have them tested every single week and make sure they don’t wind up infecting each other or their family, and just let them play the season out."

Opening Day was originally supposed to take place on March 26 before the COVID-19 pandemic pushed back the season indefinitely.