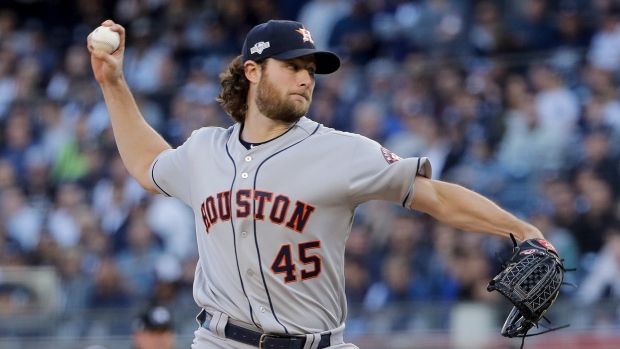 It's been pretty quiet on the free agent starting pitcher front so far this off-season, but that could be about to change.

According to The Athletic's Ken Rosenthal, the New York Yankees will meet with starters Gerrit Cole and Stephen Strasburg over the next two days. Other interested teams have met or will soon meet with the duo in the near future.

Joel Sherman of the New York Post took things a step further, reporting the Yanks will meet with Cole on Tuesday and Strasburg the following day.

Rosenthal adds it's possible one of the starters will sign as early as the winter meetings beginning next week in San Diego.

Andy Martino of SNY reported last month that Cole could take until January or beyond to sign, which Rosenthal reports could happen too, writing "the Cole negotiations, in particular, seem likely to extend past the meetings and possibly into January."

Cole has been connected to the Yankees, as well as the Los Angeles Angels, who play quite close to his home in Newport Beach, Calif. Former Houston Astros teammate Josh Reddick said during the season he could see Cole signing with a team "west of Nevada," which lines up with the Angels being a potential suitor.

In addition to the Yankees, Strasburg, a San Diego native, is expected to draw interest from his hometown Padres, although Rosenthal writes many "in the industry believe he will return to the [Washington] Nationals."

Cole and Strasburg are widely believed to be the best two starters available this winter on the market. Cole is the top player on TSN's Top 50 MLB free agents board, while Strasburg clocks in at No. 3. The top position player on the list is third baseman Anthony Rendon at No. 2.