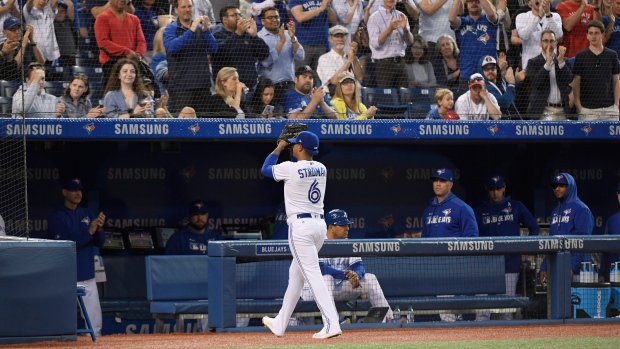 TORONTO — The StroShow is heading home.

The rebuilding Toronto Blue Jays have traded top starter Marcus Stroman to the New York Mets for a pair of pitching prospects.

Stroman, who had been part of trade rumours for much of the season, posted a message on his Twitter account expressing his excitement of the news.

"NEW YORK! Where I was born. Where my heart lies. Where my family resides. Crazy excited for this part of my journey. Some things were meant to be! @Mets #HDMH."

Multiple reports that Stroman was heading to the Mets in a deal involving prospects going to the Jays broke shortly after Sunday afternoon's 10-9 loss against Tampa Bay at Rogers Centre.

Stroman left the Blue Jays clubhouse post-game with a unknown companion in a hurry, headed for the underground parking garage, and didn't speak to media. But he did show his appreciation for the city of Toronto on Twitter.

"CANADA. TORONTO. Words can't really explain the extent of my appreciation and love. Beyond thankful and blessed to have played for this unbelievable nation. Thank you for your constant support, love, and loyalty. I'll be back plenty in the future!"

The five-foot-seven Stroman is 47-45 with a 3.76 ERA in six big league seasons. He grew up on Long Island near Mets starter Steven Matz, about 50 miles from Citi Field.

Stroman was in much better form this year after an injury-plagued 2018 campaign, when he struggled to a 4-9 record and 5.54 earned-run average over 19 starts.

A lone bright light in a rotation hamstrung by injuries and ineffectiveness, Stroman was 6-11 with a 2.96 ERA this season and was selected to the American League all-star team for the first time. Stroman, who becomes a free agent after the 2020 season, missed the mid-season classic with a pectoral strain.

His final start as a Blue Jay came last Wednesday when he allowed one run over seven innings in a 4-0 loss to the Cleveland Indians. As he left the field to an ovation after his final frame, he shouted, "This is my house."

Stroman threw over 200 innings in 2016 and '17 but was limited to 102 1/3 innings last year. He had stints on the disabled list due to shoulder fatigue and blister problems.

Drafted 22nd overall by Toronto in 2012, Stroman was in his sixth big-league season with the Blue Jays.

The right-hander made 26 appearances — 20 starts — in his rookie campaign in 2014, going 11-6 with a 3.65 ERA. Stroman underwent surgery after tearing a knee ligament the following spring but returned in time for the stretch drive as the Blue Jays ended a 22-year playoff drought.

Stroman was 9-10 with a 4.37 ERA in 2016 as the Blue Jays returned to the American League Championship Series.

In 2017, the Duke University product helped the United States win the World Baseball Classic. He got the victory in an 8-0 rout of Puerto Rico in the final and was named tournament MVP.

His strong play carried over into the Blue Jays' season as he won a Gold Glove that year and finished 13-9 with a 3.09 ERA, finishing eighth in AL Cy Young Award voting.

A polarizing figure at times, Stroman is quick to show his passion on the field but can also rub some people the wrong way. He'll often shimmy on the mound after a strikeout or at the end of an inning, a move that can upset and sometimes motivate opposing players.

Stroman has also had a rather mixed and occasionally combative relationship with the media over his career.

Sometimes questions would be ignored altogether depending on who was asking them. Conversely, he was refreshingly candid at times and often supplied engaging thoughts and opinions.

The 28-year-old from Medford, N.Y., frequently professed his love for the team, the city and Canada. But he had a sense his future might be elsewhere, stating after a game in mid-June that he didn't think he'd be signed to a long-term deal with the Blue Jays.

Stroman has one arbitration year left on his contract and is scheduled to become an unrestricted free agent in 2021. He's earning US$7.4 million this season.

His departure comes as Toronto continues a deep rebuild. The Blue Jays, who are well back in the East standings at 40-67 are expected to be at least a few years away from contention.