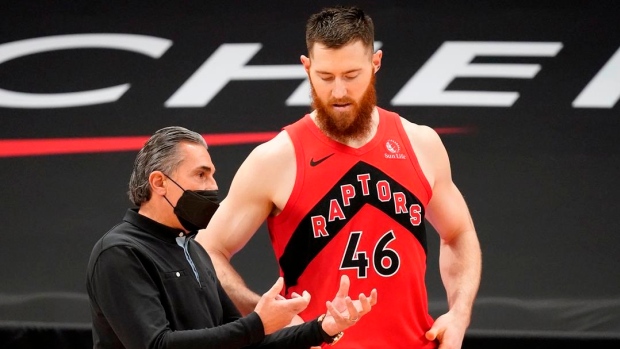 According to TSN's Josh Lewenberg, Scariolo has had preliminary discussions with Italian Club Virtus Bologna but no decision has been made.

Reports of Raptors assistant coach Sergio Scariolo leaving the team for Virtus Bologna are premature, I'm told. He's had preliminary discussions with the Italian club but no decision has been made.

A native of Brescia, the 60-year-old Scariolo joined Nick Nurse's staff ahead of the 2018-2019 season, winning the NBA title in his first year with the club.

Last season, Scariolo served as the Raptors head coach in a February game against the Houston Rockets when several members of the coaching staff were placed in COVID protocol. The Raptors won the game, 122-111.

Prior to joining the Raptors, Scariolo built up an extensive European resume with coaching stints in Italy, Spain and Russia.

On top of his NBA responsibilities, Scariolo has been head coach of the Spanish national team since 2009, leading it to medals at two Summer Olympics, three Euro Basket titles and gold at the 2019 World Cup.

Among the players set to be coached by Scariolo in Bologna is former Raptors 905 guard Josh Adams.