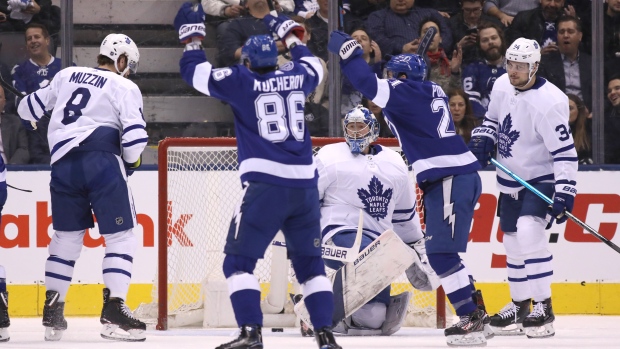 One of the most intriguing parts about the National Hockey League’s Return to Play plan is that it comes on the heels of a four-month hiatus from hockey.

Such a long break – an unprecedented one, where organizations shuttered, and players shuffled into their local stay-at-home orders – certainly complicates our understanding of the league landscape.

Which players and teams will return to game shape quickly? How long will it take teams to shake off the considerable amount of rust accumulated over the past four months? Who will fail to reach the level they were playing at before the pause? For those who had such unquestionably strong seasons, will there be an opportunity to recapture the magic of a shortened 2019-20 regular season?

It’s something I’ve been thinking about this week, particularly in light of the raging Hart Trophy discussion. One of the interesting wrinkles of that award – one that I think will come down to New York’s Artemi Panarin, and Edmonton’s Leon Draisaitl – is that they were able to build an exceptional degree of chemistry with one or more of their forward teammates.

Both players were indisputably the drivers of their line’s play, but there is no doubt that each had a linemate with a beneficial complementary skill set.

In Edmonton, Draisaitl was a scoring dynamo who leaned on Ryan Nugent-Hopkins’ creativity and defensive game for support. In New York, Panarin immediately gelled with another capable playmaker in Ryan Strome.

It’s hard to find a superstar in the midst of a season as productive as the ones Draisaitl and Panarin were having who didn’t benefit in some way from the play of their linemates.

Heading into the playoffs, it made me curious as to who were the most effective forward combinations we saw over the course of the regular season and how they stack up against one another.

The Draisaitl-Nugent-Hopkins and Panarin-Strome tandems were near the top of the scoring combination leaderboard, but neither held the top spot.

On a per-minute basis, this superstar duo still ranks near the top of the league, though Nashville’s Nick Bonino and Craig Smith (+2.7 goals per 60 minutes) are tops there.

Perhaps more interesting: the league’s best combinations will all be featured in the NHL’s Return to Play plan. In fact, the only forward combo that drove a materially positive goal differential at even strength that won’t be featured come August is in Los Angeles (Anze Kopitar and Alex Iafallo were +9 at evens this year).

Every other group is in: 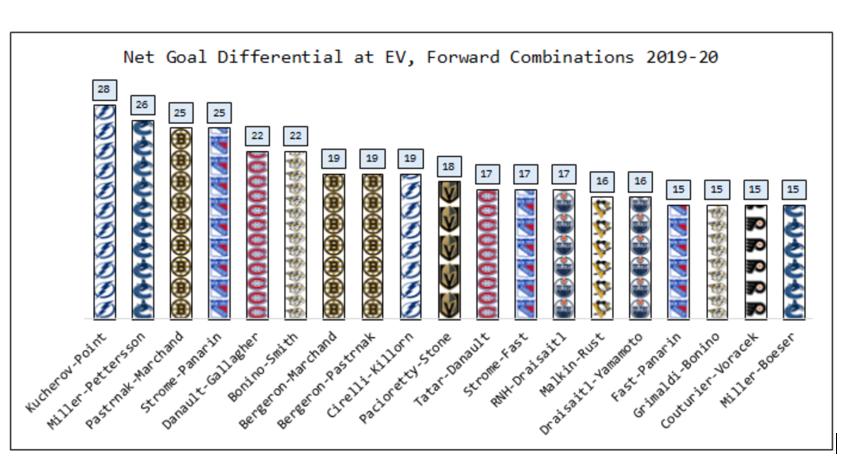 One of the fascinating parts of this leaderboard is that each combination is a little bit different than the next, though their overall productivity is relatively comparable.

Some of the combinations did it through stifling defensive work.

The opposite end of the spectrum saw explosive offensive outbursts offsetting defensive breakdowns and poor goaltending.

Pittsburgh’s Evgeni Malkin and Bryan Rust gave up 32 goals on the ice this season, or 2.9 goals against per 60 minutes of play. But offensively, no five-man unit was capable of slowing them down, scoring 48 goals (a whopping 4.3 goals per 60 minutes) when paired up at even strength. They may have been defensively challenged, but at the end of the day their offensive productivity was unparalleled.

It’s worth mentioning that there is at least one play-in series where we will see a couple of elite even-strength lines go head-to-head, and it’s surprisingly the No. 5 versus No. 12  matchup in the East.

The Malkin-Rust combination was outstanding in Pittsburgh but so, too, was the top unit in Montreal, which features the likes of Philip Danault, Tomas Tatar, and Brendan Gallagher. The current version of the Canadiens is quite flawed, but the team outscored their opponents at even strength all season, predominantly on the back of the team’s first line.

It may not be the best series of the play-in round, but the chess match between Claude Julien and Mike Sullivan to maximize opportunities for their premier forwards should provide high entertainment value.