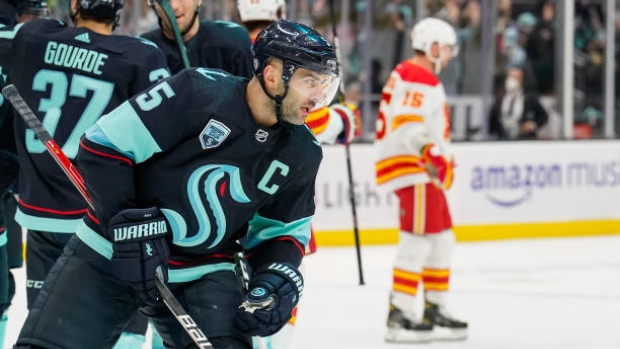 In the past few weeks, there has been increased focus on the Seattle Kraken. There was earnest discussion post-expansion draft as to whether this team could contend for a playoff spot straight away, not dissimilar to what we saw from the Vegas Golden Knights in 2017-18. But so far, it’s just been a lot of losing.

Expectations may have been tempered just a touch when, during the expansion draft, the Kraken consistently opted for strategies that were friendly towards youth and the salary cap. Which, it should be noted, is still a rock-solid strategy. The Kraken have an ultra-clean cap situation and a wealth of assets. And with a bunch of front offices well aware of how the Golden Knights abused their counterparts on the trade block leading up to the expansion draft, the road for Seattle always figured to be more challenging.

But at 10-19-4 and a -30 goal differential, there are genuine questions being asked about the team’s draft strategy. Setting aside the organization’s longer-term intentions, this team surely expected to be more competitive than it has been this season.

The goaltending has been dreadful, but the play in front of Philip Grubauer, Chris Driedger, and Joey Daccord has been similarly ugly. The results have invariably led to increased second-guessing about what the team did (and did not do) last summer.

Let’s look at those roster decisions once more, this with 30 or so games of hindsight in our stow. I’m using the regression-based Goals Above Replacement measure as our measure of production since (among other things) we will need to compare forwards against their defensive counterparts.

First, let’s look at straight-line comparisons across player production for draft eligibles this season – a full eligibility list can be found here: 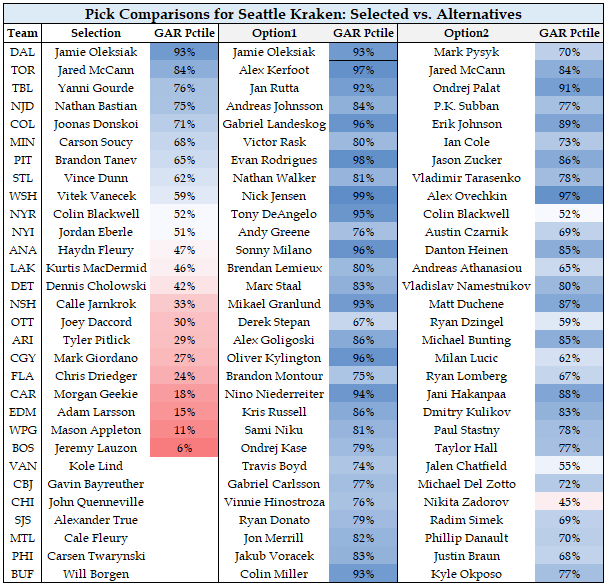 The table is ordered by the value realized by the Kraken from the player they originally selected.

In the case of the Dallas Stars and Toronto Maple Leafs, it’s fair to say the Kraken nailed their picks – Jamie Oleksiak has been full value on a pairing with Mark Giordano (and Dallas really had little to offer), and Jared McCann has 19 points in 28 games, comparable to Alex Kerfoot (19 points in 31 games) in Toronto.

But there are several other selections worth debating. Let’s zoom in on a few of the more contentious ones:

No one could blame the Seattle Kraken for missing Sonny Milano’s (eight goals, 14 assists in 30 games) breakout season, but they did miss it, and Milano has been one of the better playmaking forwards the league’s had to offer this season.

Another option? Established winger Adam Henrique, a 31-year-old veteran with three years still left on his deal. The Kraken opted for youth here, but in doing so sacrificed a lot of short-term value from the Ducks.

The Kraken selected forward Tyler Pitlick from the Coyotes, eventually flipping him to the Calgary Flames.

I thought this pick was perplexing for three reasons: Pitlick has been nothing more than a fourth-line journeyman in his professional career, and the Coyotes had both immediate value (by way of defenceman Alex Goligoski) and cheaper, younger value (by way of forward Michael Bunting) available for Seattle to take.

The fourth-round pick for Pitlick is nice, but this feels like a miss.

Speaking of the Flames: Oliver Kylington was five minutes away from joining the Kraken, but Seattle had their eyes set on veteran defenceman Mark Giordano.

I don’t think it’s fair to blame the Kraken for grabbing a player who has been one of the best defenders in the entire league over the past decade, but it’s fascinating that this is the spot where the Kraken decided to punt on youth and go for a veteran voice. Giordano is 38; Kylington has 16 points in 28 games on a league-minimum deal and is a restricted free agent at year end.

The 23-year-old Morgan Geekie has been okay for Seattle, a middle-six attacker with 10 points in 33 games. But the opportunity cost of picking Geekie was quite high. The Hurricanes were one of those teams that did have to expose some talent by way of the expansion draft, with players like Nino Niederreiter and Dougie Hamilton available.

In the final year of his contract, a player like Niederreiter would have been a tougher pick to make, but they are just two of eight rostered players on the Hurricanes who have been considerably more impactful this season. (How about that breakout season from now-Stars defenceman Jani Hakanpaa as well!)

Vince Dunn has a long NHL career ahead of him. But the concern with St. Louis was that taking Dunn meant realizing a possibly significant opportunity cost if another exposed player – sniper Vladimir Tarasenko – returned to form.

The Blues bet that Tarasenko’s injury history and high annual cap hit ($7.5-million for two more seasons) would keep the Kraken away, and it did.

And have the Blues ever won this bet. While Dunn has been steady in Seattle, Tarasenko leads the Blues in scoring and has his howitzer of a wrist shot back. So not only could have Tarasenko greatly enhanced the Seattle attack, but he could also have been an exceptional trade piece to dangle at the deadline or in the off-season to a contender.

This spans multiple teams and is at the heart of what’s ailing the Kraken.

Setting aside the defensive structure and integrity in front of the netminders for a moment, the Kraken’s decision to bet on Grubauer through unrestricted free agency was fatal. Grubauer has looked a mess, stopping just 88 per cent of shots, and has been the biggest negative contributor to this team’s placement in the standings.

And yet that isn’t the entirety of the story. The Kraken deepened the goaltending position by grabbing backup Driedger from Florida, developmental piece Daccord from Ottawa, and Vitek Vanecek from Washington.

Driedger and Daccord haven’t fared any better in Seattle, though Seattle’s other options from those teams were limited. Vanecek was traded back to the Capitals shortly after the draft, and frustratingly for the Kraken, has been full value (91.0 per cent stop rate) for Peter Laviolette’s team.

In summary? Little has changed as to the Kraken’s longer-term strategy – the team’s moves at the expansion draft indicated they wanted to build a title contender tomorrow, as opposed to a playoff contender today. But in some cases, the team went markedly to the conservative side of picks, and it hurt their ability to be anything other than a bad team this season.

Couple that with bad goaltending, and you have a rough inaugural season for the NHL’s 32nd team.