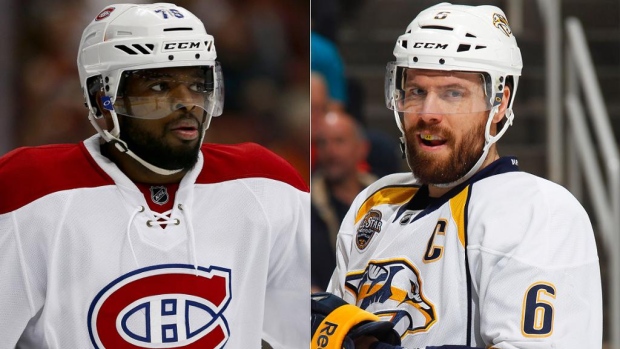 The National Hockey League isn’t really known for possessing the type of wild and furious off-season that keeps fans glued to social media for hours on end.

But every so often the league throws a curveball, like the one that came a year ago today when the hockey world was treated to two franchise-altering trades in the same half hour.

The deals had it all. They were player-for-player swaps. They included top-calibre NHLers. And, most notably to this space, they were as divisive as any trades in recent memory.

I’ll paraphrase briefly to capture the spirit of the trades, but the rift was pretty self-explanatory – the “numbers” crowd loved the New Jersey (acquiring Taylor Hall from Edmonton in exchange for Adam Larsson) and Nashville (acquiring P.K. Subban from Montreal in exchange for Shea Weber) sides of the deals. Others took the opposite approach, heaping praise onto general managers Peter Chiarelli and Marc Bergevin.

The latter of the two trades has been the more intriguing one. I’m still not entirely sure we know why Subban was traded out of Montreal, but we do know why Bergevin targeted Weber – he wanted a shutdown defender of the highest order, and no player has carried that reputation more than Weber over the years.

One thing I think gets overlooked when we discuss this trade is Nashville GM David Poile’s equal willingness to pull the trigger. I think Poile looked at the deal at the surface and saw three things: Weber’s enormous contract, the mileage Weber had racked up over the years, and the fact that the player he was getting in return was probably better.

For the purposes of this post I thought it’d be interesting to do something of a year-in-review for both defenders and the impact they had on their respective teams (all measurements 5-on-5). Below are three charts grading Subban and Weber’s performance against the rest of the defenders in the league by myriad measurements – some individual numbers, some on-ice numbers, some team relative numbers, etc. I think it gives us the best snapshot of what happened in 2016-17, and perhaps what’s to come in future years. 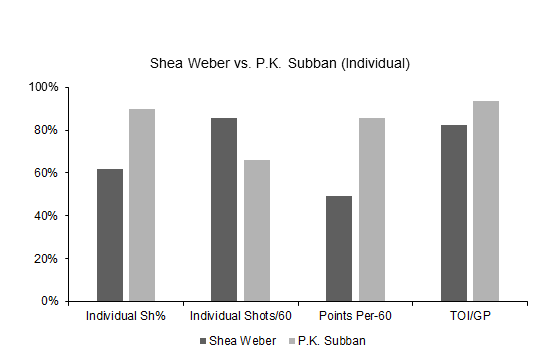 One thing I think all parties can agree on is that expectations were that Subban would move the needle more for Nashville offensively, and Weber would move the needle more for Montreal defensively. This first graph captures individual impact. Not surprisingly, Subban was more of a presence when it came to scoring sequences. Weber piled up shots – an undisputable weapon at 5-on-4, but maybe a bit less so here – but Subban’s role seems more critical, outperforming about 90 per cent of defenders league-wide as it pertained to converting on his own chances and accumulating points on scoring plays.

However, that’s far from the full story. Let’s head next to on-ice numbers, or how Montreal and Nashville did as a unit when their star blueliners were out there. 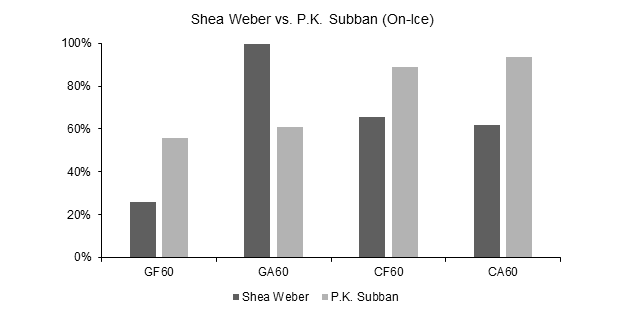 This is where the story gets fascinating. Weber had an absolutely monstrous year in terms of keeping pucks out of his own net. He was the best defender in the league at suppressing goals, and that alone drove incredibly strong goal differentials – Montreal owned about 60 per cent of all goals when Weber was on the ice. In fact, Weber was so good defensively that I doubt anyone noticed how little offence Montreal generated when he was on the ice. (About 80 per cent of defenders league-wide generated more goals per-60 minutes than Weber did with Montreal.)

We’ll revisit the goals against piece in a moment.

Subban’s story is a little different. Whereas Weber dominated the goals (and ultimately what we care about), Subban dominated the shots and scoring chances. Few teams were as oppressive territorially as Nashville was with Subban on the ice. It translated to Nashville getting about 52 per cent of the goals with him on the ice – a strong performance, but not exactly in line with how dominant the Predators appeared to be on most of his shifts.

Now, let’s look at team-relative numbers, or how much better Montreal and Nashville were with Weber and Subban on the ice versus their other defensive pairings.

Here’s where the story becomes telling. If you look at Weber, you’ll notice that Montreal’s save percentage was absolutely incredible when he was on the ice. The thing about relative save percentage, though, is defenders seem to have little control over how well their goalies stop shots. It’s long been argued in this space and elsewhere that the best way to suppress goals is by suppressing the number of shots an opposing team takes. The reason being, shot suppression appears to be a repeatable talent year after year, whereas impact on save percentage swings wildly with little explanation.

If you believe Weber truly impacts his team’s save percentage, I think you can conclude that he not only had the better year, but might have a leg up on Subban in subsequent years. The counterargument is that although both players had very strong years, only Subban’s appears legitimate and sustainable – and Weber is likely to regress in future seasons.

One last thought on that: Subban and Weber have played for many years in this league and we can see how well they have impacted their team’s save percentage over time. If we believe Weber can truly make goalies better, he should rank high just about every year. The alternative would also be true for Subban.

Here are their league ranks by year: 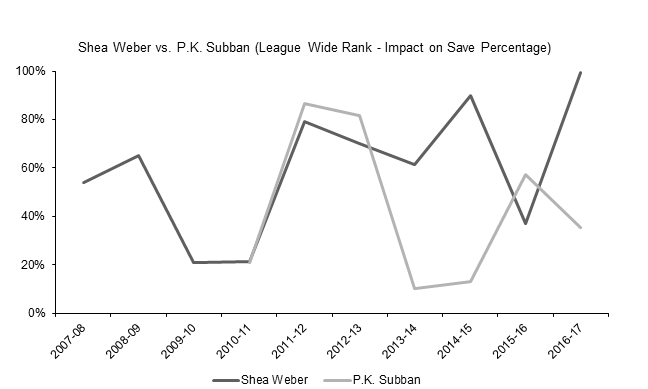 Even the most ardent supporter of the Weber trade would have to look at the above graph and conclude that just about everything went right defensively for him. Even if you thought a player could truly impact save percentage, you couldn’t ignore the fact that over the prior nine seasons, Weber has just been slightly above average here. If he didn’t get his goalies to stop 95.5 per cent of shots at evens last year, would we even be having this debate?

For the record, I think both Weber and Subban had fantastic seasons. But I do think there are a couple of worrying factors on the Weber side of this debate. Namely: It took Herculean goaltending from Montreal to make this player comparison look close. Add that to the fact that Weber’s another year older and Nashville took a decisive step forward in his absence, and I think you have to wonder if Montreal – who, of the two teams, was betting on short-term victories – is already losing the deal.