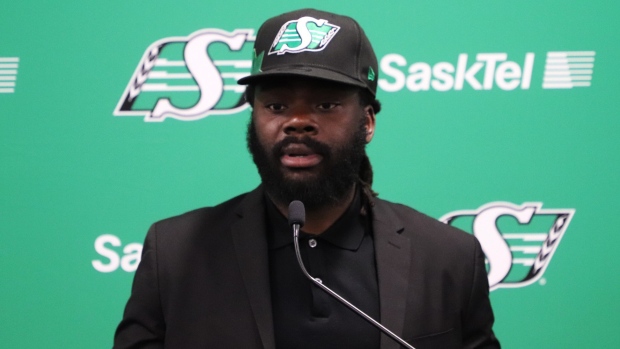 LAS VEGAS — Solomon Elimimian is the new president of the CFL Players' Association.

The union unveiled its executive Thursday during its annual general meeting with the veteran Saskatchewan Roughriders linebacker listed as president. Elimimian succeeds retired Canadian Jeff Keeping, who didn't seek re-election after four years in the post.

Elimimian was one of four candidate for the position. The others were American Keon Raymond and Canadians Peter Dyakowski and Agustin Barrenechea. All three are retired former CFL players.

Elimimian becomes the second American to head up the CFLPA. George Reed, a Hall of Fame running back with Saskatchewan, did so twice (1972-81, 1986-93).

Bowman is an American while Rempel and King are Canadians.

"This new executive is made up of a majority of active players interested in the membership's input and guidance to work together in moving our agenda forward in a positive way," Elimimian said in a statement. "I am excited for the opportunity to work with this talented group of individuals to work together in adding value to the players and grow the game we all love."

"On behalf of the CFLPA, I would like to thank our outgoing executive team for their tireless work and commitment toward advancing issues that impact CFL players," Ramsay said in a statement. "I would also like to welcome and congratulate the incoming executive team that will lead our association and serve our members over the next two years.

"I am confident this team can provide strong leadership and represent the needs of our membership."