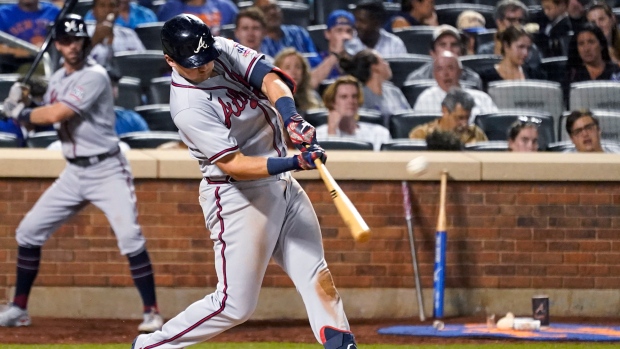 NEW YORK (AP) — Austin Riley hit a grand slam and a two-run homer to set a career high with six RBIs, powering the Atlanta Braves to a 12-5 rout of the New York Mets on Tuesday night.

Ozzie Albies and Abraham Almonte also had two-run homers for the Braves, who have won two of the first three in a five-game series as they chase the first-place Mets in the NL East. Dansby Swanson delivered a two-run double in the first inning to get Atlanta started.

Mets spot starter Jerad Eickhoff (0-2) gave up 10 runs on seven hits and five walks in 3 1/3 innings. Jeff McNeil and Brandon Drury each hit a two-run homer for the Mets after they trailed 10-1 in the fourth.

SAN FRANCISCO (AP) — Buster Posey scored the tiebreaking run on a throwing error by first baseman Cody Bellinger in the eighth inning, and San Francisco beat Los Angeles, increasing its lead over the Dodgers in the NL West to three games.

Blake Treinen (2-5) walked Posey and Mike Yastrzemski to begin the eighth. Darin Ruf hit a grounder to second baseman Max Muncy, who began to chase Yastrzemski back toward first before throwing Ruf out.

Bellinger then pump-faked toward second before launching a throw well over third baseman Justin Turner’s head and into the protective netting along the third base line. Posey, who was on his way to third, scored easily.

Bellinger singled and scored for the defending World Series champion Dodgers. Muncy was 1 for 4 in his first game back off the paternity list.

Tyler Rogers (2-1) retired three batters to get the win. Jake McGee pitched the ninth for his 21st save.

PHILADELPHIA (AP) — Trea Turner singled in the first inning and scored on Josh Bell’s three-run homer that put Washington ahead to stay, but was then pulled from the victory over Philadelphia because of a positive COVID-19 test.

Juan Soto hit another three-run homer for the Nationals in the second.

Josh Harrison doubled and had two hits for the Nationals, who snapped a five-game losing streak but still have won only twice in their past 15 games.

Bryce Harper hit his first career inside-the-park homer, doubled and drove in a pair of runs for Philadelphia.

Matt Moore (0-3) allowed six runs in six innings. Wander Suero (2-2), the second of four Washington relievers, retired all five batters he faced. Brad Hand finished it off for his 21st save.

Montgomery (4-5) gave up five hits in five scoreless innings. The left-hander was 0-4 over his previous eight outings since beating Tampa Bay on June 2, despite allowing three or fewer runs seven times.

Aroldis Chapman, the fourth Yankees reliever, worked the ninth to get his 19th save in 23 chances.

Gio Urshela drove in two runs for the Yankees, including a two-run double in the sixth off Shane McClanahan (4-4) that made it 3-0. Tampa Bay got a two-run homer from Brandon Lowe.

Wainwright (8-6) went seven innings and earned his 175th career victory. This was the 33rd stadium he’s pitched in during regular-season play.

The 39-year-old Wainwright gave up four hits, including a two-run homer to José Ramírez.

Alex Reyes picked up his 24th save in 25 opportunities.

Anderson (3-5) yielded three hits while striking out three and walking one.

Miguel Sanchez, Hunter Strickland and Jandel Gustave pitched one inning each to finish the four-hitter, the Brewers’ 11th shutout of the season.

Lewin Diaz and Brian Anderson added solo shots for Miami, which has won three straight. León singled and scored in the fourth.

Alcantara (6-9) allowed three runs and six hits in six-plus innings. He held Baltimore without a hit until Austin Hays led off the bottom of the fourth with a home run. Cedric Mullins also homered for the Orioles.

Spenser Watkins (2-1) allowed four runs and nine hits in four innings. He hadn’t allowed more than a run in any of his first three big league starts.

The 24-year-old slugger tore a pectoral muscle in spring training. He hadn’t played in the majors until going 0 for 4 Monday night.

After hitting a single in his first at-bat, he came up in the eighth after a two-out intentional walk to Jose Abreu with Chicago trailing 3-2. Jiménez connected for a 459-foot drive to left-center off Kyle Zimmer (4-1) to cap a four-run rally.

The White Sox increased their AL Central lead to 9 1/2 games.

Reynaldo Lopez (1-0) picked up the win in relief. Liam Hendriks earned his 25th save.

ARLINGTON, Texas (AP) — All-Star slugger Joey Gallo hit a three-run homer and had two assists from right field as Texas snapped a 12-game losing streak with a win over Arizona.

Dane Dunning (4-7) allowed two runs on six hits in 6 1/3 innings. The right-hander struck out three and walked two while earning only his second win in his last 12 starts.

Ian Kennedy pitched a perfect ninth inning for his 16th save in 17 opportunities.

Taylor Widener (1-1) gave up all five runs on five hits, five walks and a hit batter.

Votto has homered in a career-high four consecutive games for the second time (April 2018), one game shy of the team record.

The Reds hit four home runs in winning for the third time in five games. Jesse Winkler hit his 21st homer and Eugenio Suárez added a blast for Cincinnati.

The Cubs lost for the sixth time in their last 10. Anthony Rizzo had a two-run homer, and Patrick Wisdom and Kris Bryant added homers for Chicago.

MINNEAPOLIS (AP) — Miguel Cabrera hit a run-scoring single in the 11th inning after Eric Haase tied the game with a grand slam with one out in the top of the ninth as Detroit snapped a four-game skid with a win over Minnesota.

The Tigers tied the score with a homer in the ninth inning for the second straight game. Robbie Grossman, who singled to start the ninth-inning comeback, hit a two-run homer on Monday night before Minnesota won 6-5 in 10 innings.

José Cisnero (2-4) got out of a 10th inning jam to earn the win for the Tigers. , who snapped a four-game losing streak. Daniel Norris notched his first career save.

Jorge Alcala (2-5) allowed Cabrera’s single and took the loss in 1 1/3 innings of relief.