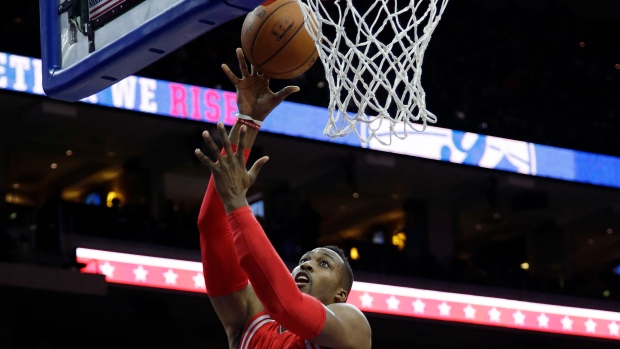 Oakland, CA - Dwight Howard's status for Thursday's Game 2 of the Western Conference finals remains up in the air after the Houston Rockets center injured his left knee in the series opener.

Howard took an inadvertent shot to his left leg from teammate Josh Smith during the first quarter of Tuesday's Game 1 against Golden State. He returned to start the second half but was clearly limited by the injury, as Howard did not record a point in 10 minutes over the final two quarters.

"It was very painful," Howard said after the Rockets' 110-106 loss to the Warriors. "I tried to play it off as much as possible, but I couldn't give my teammates what I needed to give them. It was disappointing.

The Rockets have termed Howard's injury as a sprain and have listed him as questionable for Game 2, though the eight-time All-Star told reporters he's hopeful of playing.

"I don't think that it's going to be something that is going to restrict me from playing for the rest of the series," Howard said on Tuesday. "I'm just going to stay positive, stay focused and the doctors are going to do their job to make sure I get on the floor."

Howard, who averaged 17.6 points and 13.9 rebounds during Houston's series win over the Los Angeles Clippers in the semifinal round, missed 41 games during the regular season due to swelling in his right knee.