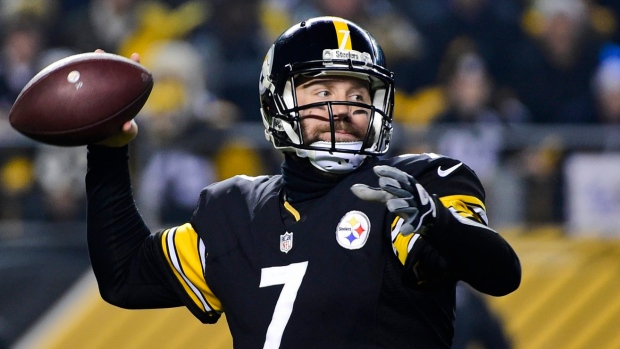 PITTSBURGH, Pa. - Antonio Brown crossed the goal line with the exclamation-point touchdown and decided it was time to turn the goal post into his personal jungle gym. The Pittsburgh receiver spread his legs, leapt and tried to squeeze the yellow post pad with his legs. Instead, he slipped down and landed on his rear with a harmless thud.

It was the most resistance any of the Steelers felt all night. It tends to happen when Ben Roethlisberger is under centre and the Indianapolis Colts are on the other side.

The Pittsburgh quarterback threw for 364 yards and four touchdowns in a 45-10 dismantling of the decimated Colts on Sunday night, giving him 866 yards and 10 touchdowns — with no interceptions — his last two starts against Indianapolis.

"I just feel a chemistry growing between us on offence," Roethlisberger said. "Things just seem to be working."

Then again, they typically do against the Colts. Brown caught eight passes for 118 yards and two scores and added a 71-yard punt return for a touchdown in the final minutes for the Steelers (7-5).

Martavis Bryant hauled in four passes for 114 yards and a score, and DeAngelo Williams added 134 yards rushing as Pittsburgh shook off a slow start to dominate the Colts (6-6) over the final three quarters.

"We have the best quarterback in the NFL," Brown said. "We have a great offensive line and running back ... We're doing a great job and getting better each and every week as a team. Today we showed that."

Indianapolis, not so much.

Matt Hasselbeck threw for 169 yards with a touchdown and two interceptions before leaving in the fourth quarter because of neck and shoulder pain. The Colts remain tied with Houston for the lead in the AFC North.

"I give credit to the Steelers," Indianapolis coach Chuck Pagano said. "They played well in all three phases."

Pittsburgh came in smarting following a sloppy loss in Seattle last weekend that dropped the Steelers out of the AFC's top wild-card spot, while the Colts had been surging under the seemingly ageless Hasselbeck. The 40-year-old began the night 4-0 this fall while filling in for injured Andrew Luck, playing with the energy of a player at the onset of his career instead of one fighting off the twilight.

Whatever magic Hasselbeck possessed disappeared quickly in a stadium where he has never won. He threw a pair of interceptions in opening 11 minutes, matching his season total. The first one came on the game's third play, a lob at the goal line that linebacker Jarvis Jones snatched out of the air for his first career interception. Hasselbeck's second came later in the quarter on a tipped ball that ended up in the hands of cornerback Brandon Boykin, seeing his first extended playing time since the Steelers acquired him from Philadelphia in August.

"Just terrible," said Hasselbeck, who believe he'll be fine. "There's really no excuse. We were in it. We had chances and we didn't capitalize offensively."

Boykin's interception led to a 51-yard field goal from Chris Boswell that gave the Steelers a 6-3 lead. Hasselbeck found Frank Gore for a 9-yard score that put Indianapolis in front, a touchdown that seemed to remind Pittsburgh that Roethlisberger put up 522 yards and six touchdowns in a victory over the Colts last fall.

The Steelers finished the first half with a flourish. Roethlisberger completed six straight passes on an 80-yard drive that ended with a 7-yard dart to Brown that pushed the Steelers ahead. Roethlisberger found Will Johnson for the team's NFL record seventh 2-point conversion to make it 14-10. The quarterback was even better running the 2-minute drill on Pittsburgh's next possession, going 60 yards in eight plays, the last a 5-yard toss to Markus Wheaton just inside the pylon that put Pittsburgh up 11 at the break.

The Colts went three-and-out to start the second half and the Steelers effectively entered the competitive portion of things when Roethlisberger found Bryant with a rainbow down the right sideline. Bryant chased it down and simply ran away from a pair of Indianapolis defensive backs on his way to a 68-yard play that put the Steelers up 18. Indianapolis' last best shot to get back in it came later in the quarter, but Hasselbeck was chased to the sideline and threw incomplete on fourth down at the Pittsburgh 14.

Brown finished the Colts with two more scores, a 5-yard reception 49 seconds into the fourth quarter before adding the fourth punt return touchdown of his career even if the celebration didn't go as planned.

"I tried to stick it at the end with the goal post and it wasn't something that went very well," he said with a laugh.