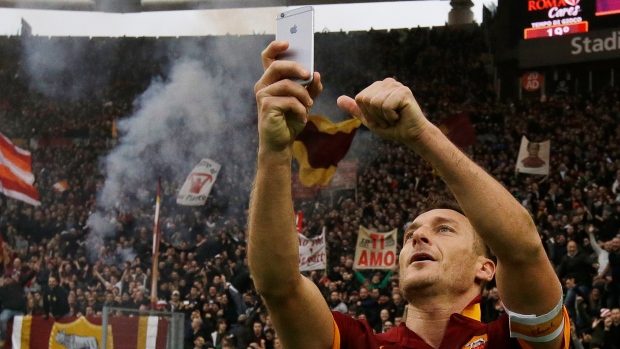 With his 11th career goal in the derby, Totti tied Dino Da Costa, a Roma player in the 1950s, for the record in the all-time series between the fierce rivals.

And he did it in style — then immortalized the moment.

After scoring the equalizer with an acrobatic bicycle-style kick from close range in the 64th minute, Totti grabbed a phone from Roma's goalkeepers coach Guido Nanni and took a selfie with the Giallorossi's "ultra" fans celebrating in the background.

Totti spent a few moments getting the camera ready, then held it up, put a funny smile on his face and took the shot, which was later posted on Roma's Facebook page.

"For a Roman, (the record) is one of the greatest things that there could be — for me and for all Romanisti," Totti said. "I'm not used to taking (selfies), because I like my private life to remain that way, but I had thought of a special celebration during the week and with this selfie everyone will remember the goal."

Meeting a cross on the left flank from Jose Holebas by the far post, Totti stuck his right foot up above the rest of his body to pull the ball down and into the centre of the net while airborne.

It was Totti's fourth goal this season and he is second all-time in Serie A with 239 goals in 574 matches, trailing only Silvio Piola, who played from 1929-54 and scored 274.

In the first half, Felipe Anderson set up a goal for Lazio captain Stefano Mauri 25 minutes in, then scored himself four minutes later.

Totti scored his first in the 48th by redirecting in a cross from Kevin Strootman.

Roma moved provisionally level with Serie A leader Juventus, which was visiting Napoli later, while Lazio was nine points back in third.

"Unfortunately we threw away the first half," Totti said. "In the second half we came back, showing that we can fight for the title."

As usual, fans for both sides produced colorful tributes to their clubs before kickoff, accompanied by plenty of flares, smoke bombs and other strong fireworks.

Lazio had "Je Suis Charlie" written on its shirts and wore black armbands to show solidarity with France following the violence in Paris in recent days.

It was all Lazio in the first half, which looked like an extension of the 3-0 rout of Sampdoria by coach Stefano Pioli's club on Monday.

Mauri volleyed from the edge of the box following a cross from Anderson, then Anderson found the target himself with a long, low shot inside the near post.

The 21-year-old Anderson has five goals and five assists in his last three matches and is bolstering his status as Brazil's potential next standout. However, he exited in the second half after an apparent bruise.

Totti walked off holding his left side with an apparent injury in the 85th but came back on moments later with Roma having already used all three of its substitutions.

Germany veteran Miroslav Klose came on for Lazio after Totti's equalizer and was denied by Roma goalkeeper Morgan De Sanctis in the 90th.

"We played a great derby — level with Roma," Lazio coach Stefano Pioli said. "We're a strange squad, with a lot of pros and some cons: for example, we're more aggressive in attack than in defence. If you look at Roma's two goals, we didn't have fewer numbers but we weren't nasty enough."

Andrew Dampf can be followed at www.twitter.com/asdampf