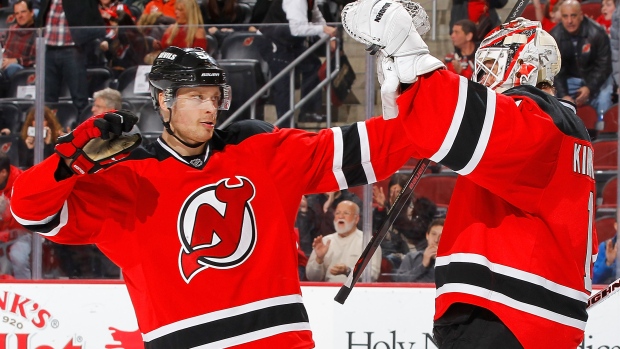 NEWARK, N.J. - The win was a treat for Devils rookie goalie Keith Kinkaid. Getting his first career shutout would have made it even sweeter.

"I can't lie. It was in the back of my mind," Kinkaid said. "I tried not to think about it too much. It wasn't the end of the world."

Just the end of a shutout bid for a rookie backup who improved to 2-3-3 in his first start since Jan. 9.

"It was upsetting to go 58 1/2 minutes without giving up a goal (and then losing the shutout bid)," Kinkaid said. "Hopefully, there will be plenty more games in my future, and we'll get it done."

Kinkaid stopped 26 shots while Mike Cammalleri and Steve Bernier each had a goal and an assist. Jaromir Jagr also scored as the Devils won for the sixth time in 10 games (6-2-2).

Kinkaid got the start as Cory Schneider rested after facing a season-high 43 shots in the Devils' 2-1 overtime loss to Pittsburgh on Friday.

"He's played well everytime he's been in there," Devils general manager and co-coach Lou Lamoriello said. "Too bad we couldn't get the shutout for him. I've said all along that our goaltending is something we feel very good about."

Kinkaid, an undrafted free agent, was solid as the Devils beat the Panthers at home for the fifth straight time.

Kinkaid lost the shutout on a drive by Brandon Pirri.

It was a costly loss for the Panthers who hoped to gain ground in the chase for a playoff spot. Florida started the day six points behind the New York Rangers who held the second and final wild-card position in the Eastern Conference. While the Panthers lost for the sixth time in the last seven games, the Rangers beat the Carolina Hurricanes 4-1.

The Panthers play the Rangers on Monday night at Madison Square Garden.

"We're fighting to catch the Rangers and we have them next," Panthers forward Shawn Thornton said. "They're a team ahead of us. It's going to be hard to catch them this way."

Jagr and Cammalleri scored in a span of just under 5 minutes as the Devils jumped out to a 2-0 lead in the first period.

Jagr opened the scoring at 9:40 with his 10th goal of the season, the 715th of his career. Jagr is now only two goals behind Phil Esposito, fifth on the all-time list.

Set up by passes from Dainius Zubrus and Cammalleri, Jagr roofed a shot from the slot over Roberto Luongo's left shoulder.

Cammalleri connected for a power-play tally with 5:13 remaining in the period to give New Jersey the two-goal advantage. The goal was set up by a beautiful between-the-legs backhand pass from Bernier to Cammalleri who got his team-leading 16th score.

Kinkaid made those goals stand up.

The Panthers controlled the scoreless second period but could not put a puck past Kinkaid. Florida outshot New Jersey 12-1 with the lone Devils shot coming from Bernier as time expired.

The Panthers had several good opportunities with some of their best coming in the on the power play with Aleksander Barkov and Jonathan Huberdeau swiping at a loose puck in the crease before Kinkaid covered up.

It was more of the same in third as the Devils concentrated on defending their zone while letting the Panthers carry the play.

Kinkaid made a big pad save on Huberdeau's slapper from the left circle with 4 minutes left.

The Panthers pulled Luongo for an extra attacker in final 3 minutes. Then Bernier iced the game with an empty netter with 2:32 to go, his fifth goal in the last six games.

The only remaining suspense was the shutout, and that vanished on Pirri's goal.

"We are not going to score this way," Pirri said. "It's not the way we're built. We have to score some ugly ones. We're an ugly team and have to start scoring ugly goals. Scoring one goal just is not good enough. It's not going to get any easier from here."

NOTES: The Panthers started a three-games-in-four-nights swing through the New York area. After visiting the Rangers on Monday, the trip concludes on Long Island against the New York Islanders on Tuesday. ... Andy Greene played in his 197th straight game, second-longest streak by a defenceman in Devils history. Ken Daneyko holds the club mark with 388. ... The Devils scratched RW Michael Ryder and D Eric Gelinas. The Panther scratches were RW Jimmy Hayes and RW Tomas Kopecky.