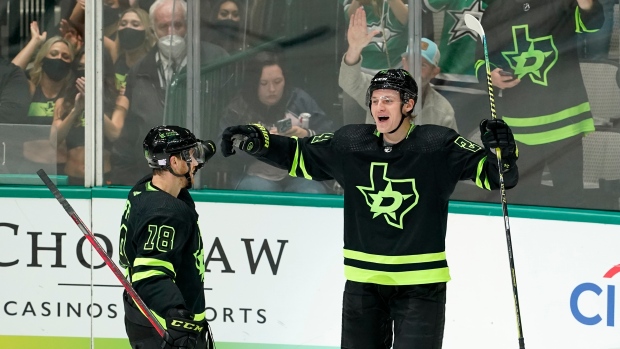 Hintz became the first Dallas player with two short-handed goals in a game. Jamie Benn had a power-play goal and an empty-netter for the Stars.

Both short-handed goals started with a 2-on-1 rush. Each time, Michael Raffl slid a pass across to Hintz inside the edge of the left faceoff circle, and he beat Blues goalie Jordan Binnington, who made 29 saves.

He said he didn't feel a sense of deja vu on the second goal, his fifth of the season.

“It just comes so quick. At first I was thinking to pass back but I was already too deep. I just had to shoot it,” Hintz said.

Dallas was coming off a 7-2 loss Thursday at Minnesota.

“Especially after how we played in Minny, I think that's huge for us,” Raffl said. "We were aggressive.

“When I played against (Hintz), you can tell he's a good young player but I didn't know he was that good. I was committed to passing the whole way. I was trying to sell the shot as much as I can."

“He was really, really good,” Dallas coach Rick Bowness said. “His anticipation was really good. He’s a young goalie, and you’re going to have more ups and downs. We see the high end.”

Oettinger is 2-0 in three games for Dallas this season — he's also played for the Texas Stars of the American Hockey League.

“They made me feel I belong here. It's given me so much confidence that they believe in me,” Oettinger said.

“Our power play’s very good,” Blues center Ryan O'Reilly said. “We had some looks, but still we gave up two the other way. We know we’re better than that. We know we have to be smarter than that.”

With Stars center Oskar Sundqvist already in the penalty box 15 seconds into the second period, St. Louis defenseman Colton Parayko was penalized for holding the stick of the Stars' Alexander Radulov. He was awarded a penalty shot, but Binnington stopped Radulov's shot from close range.

A minute and a half later, Benn scored for the third straight game, deflecting Ryan Suter's shot from the very left corner of the blue line past Binnington.

Blues coach Craig Berube asked the referees to review whether Suter's shot went in off Benn's hand, which could have negated the goal.

“I wanted them to look. I guess it didn’t touch his glove. It’s tough for me to see at that time,” Berube said.

“The game for me was on the line, third period,” Berube said. “We get two power plays to start the period and that’s the game.”

Bowness said: “On the penalty kill, we're trying to be a lot more aggressive. Other than the penalties, everything else was good.”

“Five on five we were really good,” Hintz said.

The Stars were even better four on five.

NOTES: The Stars' franchise had three players — Neal Broten, Dirk Graham and Bill Collins — who scored two short-handed goals in a game, when they were the Minnesota North Stars. ... In 45 career games against St. Louis, Benn has 44 points, including eight goals and two assists in the last eight. ... The Blues had allowed only one short-handed goal before Saturday. ... Linesman Andrew Smith was helped off the ice midway through the first period after being hit by the puck. Play proceeded with two referees and one linesman. ... Dallas C Luke Glendening left the ice after blocking a shot in the third period, but returned later in the game. ... Stars D Andrej Sekera was out, listed at dallasstars.com as “under the weather.” ... Traditional rivals St. Louis and Dallas were in different divisions for the shortened 2020-21 season, so they hadn't faced each other since Aug. 29, 2000, in Edmonton, Alberta.

Blues: Return home for one game Monday against Vegas.

Stars: Host the Edmonton Oilers on Tuesday in the second game of a three-game homestand.