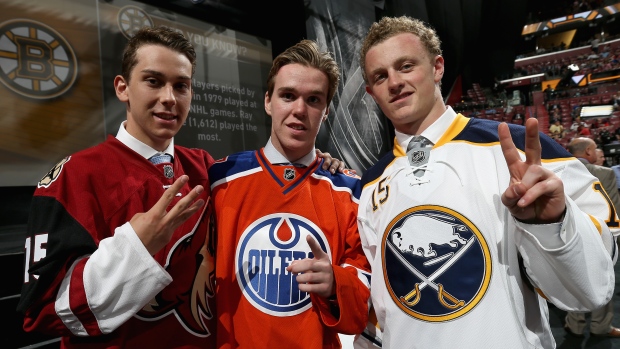 TORONTO - North American general manager Peter Chiarelli was still gushing Wednesday evening over the first NHL matchup of Connor McDavid and Jack Eichel, allured by the prospect of what the two young stars might deliver next fall.

McDavid and Eichel headlined the first group of players named to the North American entry at the upcoming World Cup.

Restricted to only those 23 or younger — born on or after Oct. 1, 1992 — the roster also includes promising Colorado Avalanche star Nathan MacKinnon, Florida Panthers cornerstone defender Aaron Ekblad as well as the Calgary Flames exciting two-some, Johhny Gaudreau and Sean Monahan.

MacKinnon and Ekblad were the last two winners of the Calder Trophy for the NHL's top rookie, while Gaudreau continues his race up the NHL's scoring charts.

Perhaps the most intriguing aspect of the roster, though, is the combination of generational stars McDavid and Eichel, the first and second overall picks at last June's draft. Long linked and compared, the two met for the first time in the NHL earlier this week, McDavid scoring both goals in an Oilers 2-1 overtime win.

North American management counted itself lucky to have both, among others, at their disposal.

"I'm just observant that the other GMs — Dean (Lombardi) and Doug (Armstrong) — are jealous and they've told me such because those two would probably be on the big team," Chiarelli said of his counterparts with the American and Canadian squads. "(I) probably don't fully appreciate it.

"I think probably in 10 years we'll look back and truly appreciate it."

In boasting the skillful likes of the McDavid, Eichel, MacKinnon and Gaudreau, the North Americans expect to play an up-tempo game at the World Cup, the power of young legs, they hope, adding an advantage when the tournament begins just before the start of the NHL regular season.

"All of guys can skate and we're going to push the pace," Chiarelli said.

That pace may be necessary given the inexperience of the North American defence, which is led by Ekblad, the reigning Calder Trophy winner. The Panthers 20-year-old sensation was joined in the initial grouping by Blue Jackets teammates Seth Jones and Ryan Murray along with Morgan Rielly, the Maple Leafs 21-year-old defenceman.

Seven Canadians made the first group, joined by nine players from the U.S.

A fellow Calder Trophy candidate to McDavid and Eichel this season, Detroit Red Wings rookie Dylan Larkin was among those selected up front along with the Flyers' Sean Couturier, the Rangers' J.T. Miller and the Blue Jackets' Brandon Saad.

North American management, helped by Hall of Famers Chris Pronger and Scotty Bowman among others in selecting the first 16, felt it important to have those like Couturier and Saad on the roster to kill penalties and absorb defensive duties where needed.

The squad's goalie stable will be full of Americans with Ducks goaltender John Gibson standing as the likely No. 1, complemented by Jets goalie Connor Hellebuyck and Penguins prospect Matt Murray. The trio, North American associate general manager Stan Bowman said, had separated themselves with their performance this season.

The most experienced of the group at the NHL level, Gibson boasts a 15-8-2 record and .918 save percentage for Anaheim this season.

"One of these goalies can get hot and boost us up quite a bit," Bowman said, noting Gibson's brief performance in the NHL playoffs two seasons ago.

While fully understanding their underdog status, Chiarelli expressed belief in the group's chances at victory — provided of course that the goaltending held up. "You have to make three or four plays in a game at this level to win the game and you've got to prevent three or four plays and we're capable of doing that," Chiarelli said.

With a broken foot, Alex Ovechkin once got on a plane the day after the Washington Capitals were eliminated from the playoffs to represent Russia at the world hockey championship.

It's something the three-time NHL MVP will gladly do again at the World Cup of Hockey after headlining Russia's 16-man roster for the tournament on Wednesday.

"Doesn't matter which tournament, it's huge honour," Ovechkin said. "It's nice to be in the list, and I'm proud to represent my country."

Ovechkin was joined on the roster by Capitals teammate Evgeny Kuznetsov, Pittsburgh Penguins centre Evgeni Malkin and Detroit Red Wings forward Pavel Datsyuk. Ovechkin, Malkin and Datsyuk are part of Russia's old guard from the past two Olympics, while Kuznetsov could provide a major spark after being left off the Olympic team in Sochi in 2014.

"They are a great mixture of experience, talent, and open-mindness," Finland coach Lauri Marjamaki said. "For the players the World Cup is a huge thing. Their motivation is high and they all want to be part of the team."

The rest of the teams will announce their rosters later Wednesday.

Kuznetsov hasn't played for Russia in a men's best-on-best tournament yet in his career.

With 20 goals and 45 assists, Kuznetsov is fifth in the NHL in scoring. He'll only be 24 when he suits up for Russia during the World Cup, which begins Sept. 17 in Toronto.

Ovechkin expects Kuznetsov to get better in time.

"Everybody knew he had like, talent to be one of the best players in the league," Ovechkin said. "He's still young, obviously. In the future, he's going to be more mature, have more experience, and I'm pretty sure 20 goals is just the beginning for him. He can score 40, you know, easily in this league if he's going to continue what he's doing, and he's going to be a top player."

Speaking after the Capitals' 3-2 victory against Malkin and the Penguins on Tuesday night, Ovechkin deferred to Russia coach Dmitry Kurbatov about how much representation the KHL might have at the World Cup. The first 16 players are all playing in the NHL, but there's room for more when the final seven are named by June 1.

Ovechkin will be playing in his second World Cup after dressing for two games the last time the event was held in 2004. He was the youngest player in the tournament back then, but it gave him a taste of what this one might be like.

"I was a teenager then and I played in a couple games and it was an unbelievable experience for me just to see players from NHL," Ovechkin said. "You're just watching TV and reading the newspaper as a little guy and you play against them. It's a huge experience for young guys and a great time for experienced guys who represent their country. It's a big stage, so it's a big tournament."

Team Europe is made up of players from Denmark, Slovakia, Switzerland, Germany, Slovenia, Austria and Norway.