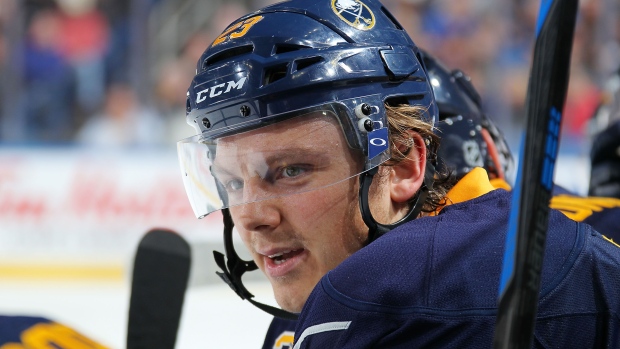 Selected second overall by the Sabres at the 2014 NHL Draft, Reinhart has appeared in nine games with the team in 2014-15, notching one assist.

The first year of Reinhart's entry-level contract is preserved by virtue of the team sending him back to junior before his 10th NHL game.

"We want him to get back there and get stronger," Sabres general manager Tim Murray said. "He's going have to find a way - two or three times a week - to slip out on his own and get to the gym and get stronger."

"We want him to think a little more about conditioning and strength and things like that. He'll find a balance with our help," Murray added.

The Sabres have managed a 2-8-1 record for just five points through 11 games. Only the Carolina Hurricanes - who have played three fewer games - have a lower points total this season.

Reinhart has averaged 10:21 of ice-time in his nine games, almost all of it at even-strength.

"The start we're off to as a team, I think, has an effect on a young guy," Murray said. "A young guy plays to what the team is doing. If the team is really successful, I think some of the individual success comes to young players. If the team is going through a rough patch, that kid will go through the rough patch with the team."

He was awarded the 2013-14 Four Broncos Memorial Trophy as WHL Player of the Year. He was also a member of Canada's fourth-place 2014 World Junior team.

Murray believes this year's World Junior tournament will be an important stepping stone in Reinhart's development.

"The World Junior [tournament] becomes important because he's going to play a big role. He's going to be a leader on the team," Murray said. "Hockey Canada's going to lean on him, as they are with a couple other guys. It's a great chance for him to feel good about his game again."

Reinhart scored two goals and two assists in seven games at the 2014 tournament and, as a returning member, is a virtual lock to make the team.

The Sabres could face another decision in the coming weeks with defenceman Nikita Zadorov.

Buffalo selected the six-foot-five, 235-pound Russian blueliner 16th overall in 2013, but the defender has only appeared in one game for the Sabres in 2014-15. Zadorov, 19, can not be assigned to the American Hockey League, so the Sabres must reassign him to either the Ontario Hockey League's London Knights before he plays his 10th game if they wish to preserve a year of his entry-level contract or arrange for him to play overseas.

Murray mentioned that Zadorov's situation has taken a back seat to Reinhart's up until now.

"I haven't come to [a] decision yet," he said. "That could be tomorrow, that could be in three weeks."

Murray noted that any possible move to the KHL was out of his hands.

"We've tried every avenue and we've been shut down at every avenue. We can't send him to the American League, as per the CBA and the agreement with junior hockey and the things they do. We're talking verbal agreements here and stuff that's way out of our hands."

The Sabres GM added that he would be in favour of a rule change that might offer an alternative to the mandatory return of underage players to junior.

"Nothing against junior hockey, I grew up watching it and know a lot of people in the game," Murray said. "There are certain players that are beyond that."

"I don't know if it's an exemption," he continued. "I was talking to our guys upstairs and maybe they give us 20 games that we could send [Reinhart and Zadorov] down for and then we have to decide in 20 games: Are they going to junior? Or, are they going to play the NHL?"

But Murray sees why there would be resistance from the teams that own the junior rights to these players.

"[CHL clubs] are not going to agree to anything like that. They have to protect their franchises and they feel that they sell tickets based on stars coming back. I understand that. It's a dilemma for development and it's not me talking about it, it's multiple teams talking about it. It's snowballing right now."