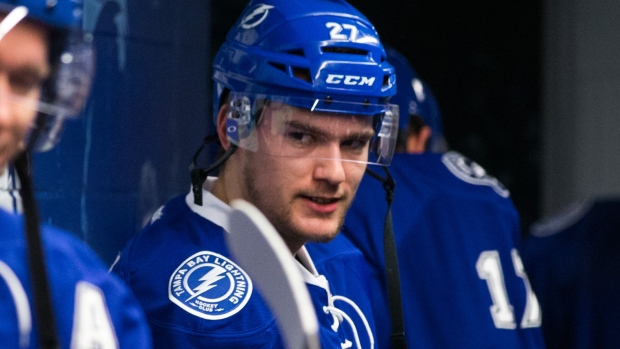 A playoff spot was probably a little unrealistic this season for a rebuilding Buffalo Sabres team that’s definitely improving in many areas, just not in the standings.

So as the Feb. 29 trade deadline approaches, the Sabres will once again announce themselves as sellers.

"The approach is the same. We’re in 29th place. I do stress that we think we’ve improved greatly everywhere but in the standings," Sabres general manager Tim Murray said over the phone this week.

"This is the process. If I can acquire younger assets or future assets for some of our veterans, especially veterans on expiring contracts, I’m going to pursue that for sure."

That means pending unrestricted free agents will be in play, topped by the likes of winger Jamie McGinn, who could have value to a contender. Defenceman Mike Weber is a pending UFA who can add depth and toughness to a contending lineup. And while I don’t think the Sabres really want to move backup goalie Chad Johnson (also UFA July 1) the Sabres might listen if the right deal comes up closer to Feb. 29, especially given what Linus Ullmark has already proven.

But the biggest name I’ve heard from other teams that the Sabres would listen on is Tyler Ennis, who still has three more seasons left on his contract at a $4.6 million salary-cap hit.

Ennis, 26, has only three goals this season but scored 20 or more goal three times in his career.

The Sabres, meanwhile, were one of many teams scouting the Tampa Bay Lightning's Jonathan Drouin last weekend. I don’t view the Sabres as one of the front-runners but just one of the many, many teams keeping en eye on how that plays out.

Among the many other teams that have talked about Drouin are the St. Louis Blues, Anaheim Ducks, Minnesota Wild, Ottawa Senators and Montreal Canadiens.

The Sens could use a top-six forward injection but not at the cost of Cody Ceci, a right-handed blueliner whom the Lightning, I think, would want as part of a Drouin deal. That’s a no-go for Ottawa. I don’t think the Senators have any interest in moving the young blueliner.

The Wild tried to get Ryan Johansen from the Columbus Blue Jackets, so why not take a shot on Drouin even though he’s not the No. 1 centre they covet? Top-six offense in any form is a need for Minnesota. Just not sure the Wild have the right pieces to make it fit with Tampa.

Anaheim can’t score this season for whatever reason. The Ducks have a number of high-end prospects who could fit the bill for Tampa, if indeed Anaheim decides to move on Drouin.

The Blues have lots of depth on defense they can dip into if they decide to make a push for Drouin.

So many teams are trying to size up the third-overall pick from the 2013 draft: Is Drouin definitely going to be a bona fide offensive star or not?

One Western Conference hockey executive I spoke with last week was worried about Drouin’s "east-west" game, which worked great in junior but hasn’t translated well to the NHL level where the speed and back-pressure is unreal.

Can he adjust? Most teams I’ve spoken with believe absolutely he will. He’s that gifted.

Still, how much do you give up now? Lightning GM Steve Yzerman wants equal value for what a third-overall pick with that kind of offensive talent should fetch.

And again, let me stress this: Yzerman is going to trade Drouin when he feels he’s got a deal that’s met his asking price, a deal that’s going to help the Lightning. There’s no clock on it. It will happen when it happens.

- Now that the Vancouver Canucks have announced veteran Chris Higgins will be traded as part of its focus on youth, one wonders what it means for 34-year-old winger Radim Vrbata (who is a UFA July 1). I don’t believe the Canucks' brass has decided either way. He’s got a partial no-trade clause and, as of Tuesday afternoon, has not been asked for a list of teams. The tricky part for the Canucks is that, while they’re retooling on the fly, they also want to stay competitive. Do they need to keep Vrbata’s goal-scoring ability for another season or two while they continue to bring in the kids underneath? Or do they take whatever assets they can get for him before Feb. 29?

TSN Insider Pierre LeBrun talks about the trade market around the NHL and the fight between the Florida Panthers and Vancouver Canucks.

- Speaking of partial no-trade clauses, Dustin Byfuglien has one as well and, as of Tuesday afternoon, has not been asked to supply a list of teams. He might not ever have to if the Winnipeg Jets end up re-signing the pending UFA star blueliner. I don’t think there’s any way Byfuglien signs for any less than five years in length, so I believe the internal debate for Winnipeg is whether it’s comfortable with that term or not. Byfuglien turns 31 on March 27.

- Team Canada’s World Cup of Hockey management group, led by GM Doug Armstrong, is planning to meet in Vancouver just before the Top Prospects Game at the end of the month to shorten their list of players ahead of the March deadline to name the first 16 players on their roster.

"Hopefully we come out there with a strong 16, or maybe 17 or 18 and need still to whittle down two," Armstrong said this week. "We’ll be at the 50-game mark then and that will give us the last 30 games to focus on the remaining 10 or so guys we’re looking at."

The remaining seven players must be announced by June 1. When asked for a player that has improved his stock, Armstrong said: "A player like Braden Holtby has had such a tremendous year. There’s other players like that, there are certain guys moving around in your group that are making it easier."

While Armstrong wouldn’t say, I suspect Holtby has played well enough that Team Canada might name both him and Carey Price by the March deadline and then name the third goalie by June 1.

By the way, that original March 1, 16-player roster deadline for the World Cup has been changed to March 2, sources said Tuesday, to give the management people involved a little more distance from the Feb. 29 trade deadline.

- Now that the Blackhawks have signed head coach Joel Quenneville to an extension, at some point over the next few years they’ll need to turn their attention to GM Stan Bowman, who has done a superb job juggling the cap and making moves to keep the Hawks a contender. Bowman has two more years on his deal past this season.

- The Canadian dollar dipped under 70 cents to the U.S. dollar for the first time since 2003 before recovering and closing at 70.13 cents U.S. The dipping loonie has obvious NHL salary-cap implications with the impact that the seven Canadian NHL teams have on overall league revenues, the cap of course a number that’s calculated off hockey-related revenue. The league projected a $74.5 million ballpark figure for next season’s cap (up from the current $71.4 million) at the early December board of governors meeting. But that wasn’t with a Canadian dollar this low in mind. I would figure that cap number will be lower than $74.5 million unless the Canadian dollar rebounds to some degree. That has huge implications for the way NHL teams plan ahead on extensions for players and trades.