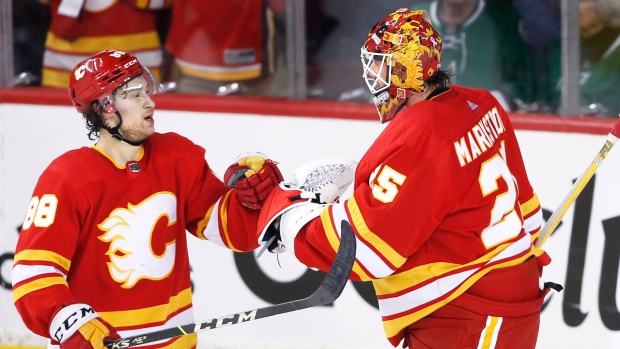 Much to the chagrin of Calgary fans, Milan Lucic’s first hockey memories of an NHL Game 7 are from the 1994 series when his hometown Vancouver Canucks defeated the Flames on a Pavel Bure overtime goal.

“Sorry to bring that one up,” he laughed.

“You think of all the Game 7s, like Ray Bourque’s Game 7 win in 2001 with Colorado to win the Stanley Cup there, and then Marty Gelinas scoring the Game 7 OT winner in Vancouver in 2004, just big Game 7 moments…sometimes it’s somebody completely different who steps up, like Mike Rupp scoring the game winner Game 7 goal in 2003 for New Jersey to win the Stanley Cup, so there’s obviously some memories as a kid and teenager watching hockey growing up.”

Ahead of the biggest game for the Flames franchise since Game 7 of the 2004 Stanley Cup Final, the team is embracing the opportunity to write its own story.

“You just get in the moment and in some ways enjoy it and in other ways, step up,” head coach Darryl Sutter said. “Pressure is a good thing. In the long run, that’s what separates you. I’ve been through several of those Game 7s and that’s in the end what separates you from where you stand in the league.”

When the Flames take the ice on Sunday, Sutter will have coached more Game 7s (11) than any other coach in NHL history. He has won seven of them, also a league record.

“I think they take on lives of their own,” he said on Saturday. “After games during a series, that’s when a series gets a life of its own too. So, you’re going to take Game 7 tomorrow and evaluate it as a life of its own too. I’ve been through a lot of them. I’ve been through them here, right? If you think about it, the last time this team went to the Stanley Cup Finals, we lost in Game 7, but to get to that Game 7, you had to win a Game 7. It’s exciting.”

Lucic has played in several Game 7s, including when his 2011 Boston Bruins team defeated the Vancouver Canucks in the last game of the playoffs to win the Stanley Cup.

“Your desire to win and will to win has to be there,” he said. “That’s usually what it comes down to in winning a big game or Game 7…You want to have emotion but there’s a balance. You want to have the emotion where you’re bottling it up and using it in the right way and not letting it get the best of you.

“You remember when you’re a kid and you’re about to run a big race and you feel like you get punched in the stomach right before you start? It’s that kind of feeling. You want to bottle that up and put it into a positive thing. This is a time when big players make big plays and get it done.”

So far during the postseason, a handful of Calgary’s biggest players have come through in the biggest moments. Johnny Gaudreau and Elias Lindholm have played well, while Jacob Markstrom has been exceptional in net. It’s not just about the big names, however - and Game 7s are an opportunity for other players to shine.

“Sometimes it’s guys that come out of nowhere that make a big play at a big time in the game,” Lucic said.

Calgary has not won a series since 2015 and won just four rounds since their 1989 Stanley Cup. The Flames have just wrapped up one of their best seasons in recent franchise history and are aiming to reward a fan base that has gotten all too accustomed to first round exits.

Veteran Mikael Backlund said that the team is in high spirits and excited for the opportunity at hand.

“I think every kid that wants to be in the NHL dreams about scoring big goals in big moments and being the hero,” he said.

On Sunday, another Game 7 story in the National Hockey League will be written at the Saddledome. The only question is who plays the role Pavel Bure did as the hero 28 years ago.

“If there’s guys in this series that haven’t been as productive as they’d like, it’s an opportunity to be a hero,” Sutter said.