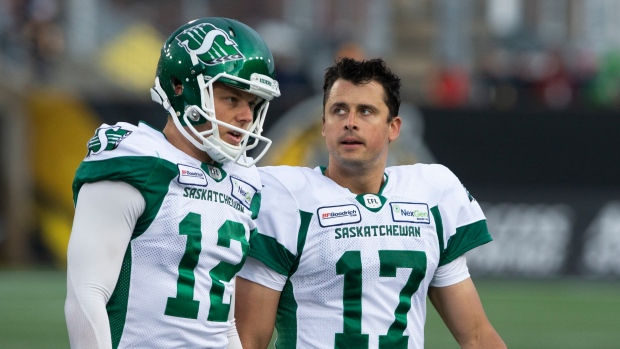 HAMILTON — Saskatchewan Roughriders quarterback Zach Collaros was injured in the first quarter of the CFL season opener Thursday night versus the Hamilton Tiger-Cats.

A scrambling Collaros left the game on Saskatchewan's third play from scrimmage after taking a high hit from Hamilton linebacker Simoni Lawrence.

Lawrence received a 25-yard roughing-the-passer penalty — one of three flags Hamilton took for 50 yards on Saskachewan's opening drive. Collaros was replaced by Cody Fajardo and returned to the Riders' sideline in the second quarter, wearing a warmup jacket and ball cap.

But Fajardo came off limping late in the third after being hit on an incompletion. He did return in the fourth quarter after being replaced by rookie Isaac Harker.

Collaros was facing Hamilton for the first time since being dealt by the club to the Riders in January 2018. Earlier in the week, Collaros candidly stated facing the Ticats was significant to him.

Collaros spent four seasons in Hamilton (2014-17) before being traded to Saskatchewan.

Collaros, 30, a native of Steubenville, Ohio, had upwards of 40 friends and family members at the game. Collaros now has a home in Aurora, Ont., after getting married this off-season.