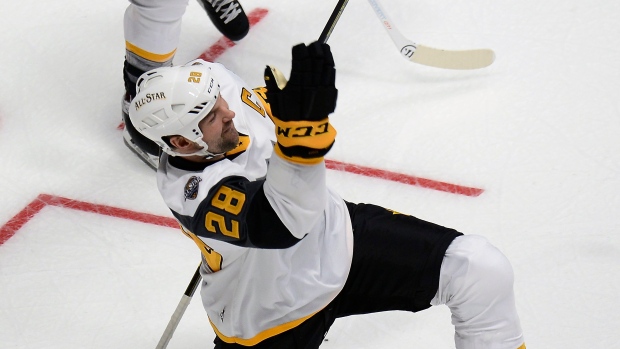 NASHVILLE, Tenn. - John Scott is making it look like he belongs.

The enforcer fans voted into the NHL All-Star Game scored twice for the Pacific Division during the team's first mini-game in the 3-on-3 All-Star tournament Sunday, bringing cheers from fans and smiles from teammates.

Scott captained the Pacific into the championship game with a 9-6 win over the Central Division.

Scott scored the Pacific's first goal on a tip-in just 47 seconds into the second mini-game during a tournament featuring the league's four divisions. He deflected a pass from a former teammate, Sharks defenceman Brent Burns, and fans roared their approval at Scott's goal.

Scott added his second goal at 13:27 of the period on a wrister, giving the Pacific Division a 5-3 lead and fans yet another reason to applaud him.

"Oh, he scored against me, too, so I was happy for him," said Predators goalie Pekka Rinne, a three-time Vezina Trophy finalist. "I'm sure it was a great experience for him this whole week."

Fans voted Scott into this game as captain of the Pacific Division even though he has scored only five goals in 285 career games.

The 6-foot-8 enforcer wrote Thursday that the NHL pressured him to not play in the All-Star Game, with one person asking, "Do you think this is something your kids would be proud of?"

Scott was traded from Arizona to Montreal after begin voted in and now is in the AHL. Commissioner Gary Bettman welcomed him to these festivities Thursday night with a quick chat.

Scott also "checked" Chicago forward Patrick Kane, the NHL's leading scorer at the All-Star break, to the ice on his way to taking a shot on net. When Kane scored on the other end, the former teammates started a mock fight.