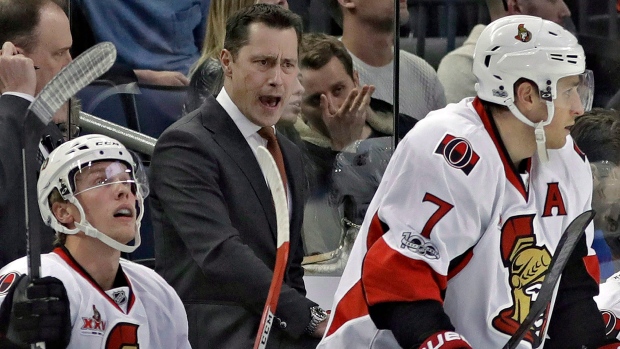 OTTAWA — The Ottawa Senators are all in, and they are reaping the rewards.

The Senators sit second in the Atlantic Division, are riding a three-game winning streak and are playing with a confidence rarely seen last season. Players say it's a result of total commitment to head coach Guy Boucher's system.

The Senators just wrapped up a three-game home stand and won two of three games by one goal, and even when trailing showed a resilience that was sometimes lacking earlier in the season.

"Guys have a total buy in," said forward Alex Burrows, acquired from the Vancouver Canucks prior to the trade deadline. "You can have any system, but if you have total buy in from all 20 guys normally that's a good sign and right now I can see in this lineup that everyone is believing in the system, everyone wants to compete in the system and we're getting the right results."

Monday night the Senators jumped out to a 2-0 lead against the Bruins and then gave up a goal with under two minutes remaining in the first period, but there was no sense of panic.

"Our team has grown over the last months," said Boucher. "Very often we'd see our team change its way of doing things when we had a goal scored against us, when we didn't start the game the right way, when we got a penalty we had a tendency to change what we do, and now you can see we're staying steady with what we're supposed to do. …There's a real balance in our approach and we stay even keeled and it's definitely paying off."

Trade deadline additions have had an immediate impact on the Senators roster as wingers Viktor Stalberg, Burrows as well as Tommy Wingels who was acquired in late January, have fit seamlessly into the lineup and added much needed depth.

"We brought in experienced guys that know how to pay the price, how to manage different parts of the game and all they needed to do was figure out how we play, and since they're that smart and that experienced they really eased themselves into our team and the way we play and our identity," Boucher said. "Actually, they enhanced our identity and that's what we're looking for."

For much of the season Boucher didn't have a trustworthy fourth line. Now the Senators are consistently rolling four lines.

With Chris Neil sidelined with a broken finger and Curtis Lazar traded to the Calgary Flames Ottawa's fourth line is comprised of Stalberg, Wingels and veteran Chris Kelly.

The trio averages in excess of ten minutes per game, allowing other players to have distinct roles and not get over-worked in games.

"I think it can keep everyone more fresh, opposed to double shifting guys which makes you tired a lot quicker," said forward Mike Hoffman. "Our fourth line has been great the last couple games. They've been out there not just putting the puck in the net, but playing hard physically and shutting down the other team as well."

The Senators head out for a three-game road trip where all three opponents, Dallas, Phoenix and Colorado, sit outside the playoff picture and realize they can ill afford to take them lightly as the battle in the Eastern Conference remains tight.

With 18 games remaining and just six at home, the Senators know success on the road will be imperative to locking down a playoff spot.